Leinster looking for game of their lives against Toulon 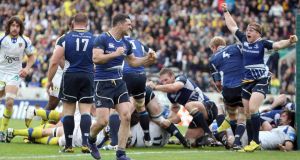 Seán Cronin and Rob Kearney raise their arms in truumph as Leinster overcome Clermont 19-15 in the Heineken Cup semi-final in 2012. Photograph: Dan Sheridan/Inpho

If there has been one outstanding high point in Leinster’s storied European Cup history, it is probably their epic semi-final win over Clermont in Bordeaux three years ago. Cast even a cursory glance over that starting XV and you can only conclude that it was one hell of a team.

Earlier this week, Leo Cullen noted that by comparison to the 2012 semi-final winning line-up, “there has been a massive turnover of players, so it’s a very different group. A lot of guys are still finding their feet at this level.”

Three years on, seven of that stellar XV, which would go on to seal Leinster’s third Heineken Cup in five seasons, will line-up for tomorrow’s semi-final in Marseille.

In terms of sheer European Cup experience, this weekend’s starting line-up does not compare too badly. Whereas the starting XV of three seasons ago went into that game with 650 appearances in the tournament, tomorrow’s boasts 563 (577 if Eoin Reddan starts), which equates to 43 caps per player as against 37.5 for Toulon.

However, when measuring the two sides in terms of quality – a more subjective argument – it is hard not to dispute that the 2012 line-up simply had much more about them. Aside from all their Test caps and being bulk suppliers to Ireland’s 2009 Grand Slam, nine were already two-time Heineken Cup champions, while five more had won it once; then there was Brad Thorn, merely a World Cup and Super Rugby title winner.

Indeed, one of the most striking contrasts between the 2012- and 2011-winning teams and today’s team, was the presence of Thorn and Nathan Hines. In Reggie Corrigan’s view, Leinster are badly missing what he calls that Paul O’Connell-type of secondrow enforcer.

“I am impressed with Devin Toner. He has improved dramatically over the last number of years. But you also need a hard man/ enforcer in there. You need that kind of element in any good pack. You need an abrasive type of character like that, with real presence in the secondrow, and Leinster haven’t had that for three years now.”

Corrigan adds: “When you look at what has been lost at Leinster, like Johnny Sexton and the centre combination of Gordon D’Arcy and Brian O’Driscoll in their prime, that has a massive effect on a team, and I think the players who are in those positions currently are doing their best but they’re just not at the level those players were at in their prime.”

That 10-12-13 axis Corrigan refers to brought 189 European Cup caps into that semi-final against Clermont, whereas tomorrow’s trio have 41, not to mention a lack of experience of Test rugby as well.

“It’s also about the attitude of those players, the Sextons, the D’Arcys and O’Driscolls on the pitch. Their body language showed confidence and an attitude of ‘we are not backing down. We are not accepting defeat’. They brought that type of presence, and the lads who are there at the moment don’t have that same presence.”

A particular source of concern, to the minds of most former players, pundits and supporters alike, is how porous the Leinster defence has become – witness 90 missed tackles and the leakage of 13 tries in their last four games.

To miss 25 tackles against Bath and emerge triumphant was almost miraculous. “What I saw against Bath was players falling off tackles, which was something that we’ve never seen from Leinster in the past,” says Corrigan.

“Defence was something that they built their attack on. They could defend so well and then turn that defence into attack off turnover ball, and be gone. In a split second they could have two passes away from a turnover ball and be gone.

Yet think back to only last May, and their Pro12 final win over Glasgow, and that was still very much a Leinster trait. However, aside from their defensive line speed not putting opponents under the same pressure, perhaps here too they are missing the effectiveness of O’Driscoll and D’Arcy, who were auxiliary flankers in their ability to snaffle ball on their feet in the tackle area.

On the plus side, Corrigan maintains the pack have held up reasonably well, with a solid scrum and solid lineout, adding “there is a good backrow there and they can make a good impression on the game against Toulon”.

“The scrum has done a good job against Bath, and when they have Cian [Healy] there and Ross locking down solid, they have a good frontrow combination. I like Cronin there as well. So the scrum hasn’t been an issue. The lineout has been solid, not amazing, but solid. I think the defensive lineout hasn’t been as good as it has been in the past. I think they’re missing Leo [Cullen]and the organisation he brought. They were very good at picking off opposition lineouts. They’re not quite as smart at that as they used to be. But the set-pieces in general are decent. It’s in other areas that they’re falling off a bit.”

Jimmy Gopperth and Te’o, twice, did make try-scoring incisions against the Dragons, but for all the running ambition and width Leinster employed against Bath, too often the visitors were able to drift onto the next receiver.

“I think we need to see more deception in their attacking game,” says Corrigan, “with decoy runners, and players running off shoulders, so that if someone does manage to make a half-break, rather than just going to ground, players are looking to offload that ball to players who are running into space or gaps, because we haven’t seen that at all.

“What’s happening is that the ball is getting moved along the line, someone runs up, they get tackled, they go to ground and it’s recycle the ball. But that allows defences time to get organised, whereas if they went back to the way a Darce took a step on the inside, getting a half-tackle and offloading to Drico, or something like that, the next thing is they’re gone and they can link with Kearney or Lukey Fitz.

There were signs of Kearney hitting the line much more in that encouraging opening half-hour against Bath, but once again after looking like they could pull clear, as even Leo Cullen conceded during the week, when Bath came back to within a score Leinster became “jittery”. This betrays signs of a team low on confidence after a run of just two wins in seven games – albeit three of them were draws – and coming unfortunately at the business end of the season.

Corrigan would dearly love his province to defy the odds and win tomorrow but admits “unfortunately” that he’s not too optimistic. “I think it’s a mammoth task. I think it’s a hugely difficult game for Leinster to go and win. There’s always a possibility that they can go and get a result, but my head tells me that from what we’ve seen this season the evidence isn’t there that they can draw on the kind of performance to get a result like that.

“One to 15 are going to have to have pretty much the games of their lives to get a result, but from the evidence we’ve seen this season it’s hard to see that being the case.”

Whatever about contrasting the Leinster class of 2012 with 2015, when comparing Clermont then with Toulon tomorrow, the opposition is as tough. “If not tougher, yeah,” says Corrigan.

“It will be a warm day in the south of France in April, and they have all been here before. You can see Toulon, especially after all the French and English teams put the squeeze on [for a revamped Cup], will be trying to prove a point and show their dominance. They seem to be an outfit that are capable of doing that, and could pull out a big performance in this semi-final.”