Leinster do enough against Bath to reach semi finals 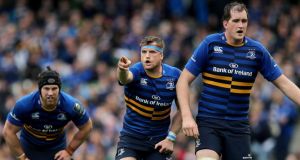 Much ado about nothing really. Leinster instinctively know what’s needed to win a European quarter-final. They have done it seven times now.

Toulon, or even Wasps, will be unperturbed.

Pockets of brilliance from George Ford kept Bath in touch but memory muscle, that winning habit, call it what you will, ruled the day.

Matt O’Connor’s charges were efficient and little else.

The unerring Ian Madigan did his duty, putting six penalties between the posts. Cian Healy and particularly Sean Cronin delivered the carries that a 43,958 crowd yearned to see from O’Brien.

At least Jamie Heaslip was everywhere, cleaning up, playing hurt and leading. Jordi Murphy was another constant contributor forcing Leinster over the gainline.

Fergus McFadden was superb and accurate until becoming the latest concussive statistic. Mike McCarthy wonderfully aggressive when tempting Bath forwards to strike him.

Leinster were the dominant force when it mattered. They quickly recovered from George Ford’s dazzling individual try on 20 minutes. It helped that Andre Watson was yellow carded for failing to get out of Rob Kearney’s way in mid air. Rules are rules. Leinster gathered six points while the Bath fullback was sin binned.

But the same season long problems remain. The ruthlessness of yesteryear is gone, best example being the three system failures leading to Ford’s try. Madigan failed to grab Horacio Agulla after leading his own kick chase. The dominos started falling as Francois Louw further ruptured the blue line by escaping Healy’s grasp. Such ragged, broken play is a joy for Ford and his clever dummy opened only a small gap but Kearney couldn’t live with the 22 year old’s pace.

Ford wasn’t controlling the game’s tempo though. His conversion hit the post, a second miss to go with an earlier penalty.

As half-time loomed, McFadden’s jarring hit on the ever dangerous Jonathan Joseph shut down the outside channel. The winger’s rip as the second tackler moments later saw the Leinster players running off the field as one thumping organism.

McFadden’s afternoon was all but done as Kyle Eastmond’s shoulder left him prostrate just seconds after the interval.

It was Ford’s eye for a mismatch that kept the contest alive. The English outhalf cut between Devin Toner and Healy to put captain Stuart Hooper crashing over in the 47th minute. His conversion made it 15-12.

So confident of the six point lead, it sounded like many Leinster supporters were cheering (genuinely) when Peter Stringer arrived.

Maybe we’ve grown too accustomed to test match intensity, but this was miles off that. Even when a Ford penalty made it 18-15 with five minutes to play. From the next play Francois Louw got a textbook steal over Gordon D’Arcy as Ford nudged them down field. But Bath couldn’t string together the twenty plus phases required to win at this rarefied level.

Eoin Reddan did almost gift them a late try but he scrambled back over the try line after Alafoti Faosiliva blocked his attempted clearance.

So Leinster canter home against average opponents. Much still to do.