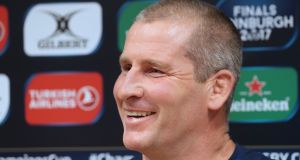 Senior coach Stuart Lancaster: “I’m keen to continue on what I am doing here” in Leinster. Photograph: Dan Sheridan/Inpho

Maybe the room wasn’t expecting a shroud and hearse from Stuart Lancaster on the current mood of Connacht. But in the light of Pat Lam’s decision to leave, on the back of all the talk of inclusion and building teams around community, there could have been a morose vibe to his patter.

But Lancaster is a coach who just over a year ago when England went out at the pool stage of a World Cup they were hosting, set himself up almost daily at the England base in Bagshot for withering sessions of cross-examination.

The British media had flame-throwers for dictaphones and the streams of fire largely curled around the head of the England coach. Rugby life has taught him about such things as the virtue of the here and now and the external covering, the carapace, that every professional learns to grow.

Lam will leave, Lancaster believes, and the players will line up to show him that what he has built in Connacht over three years is substantial, and for the next five months they won’t let him down. It was a refreshingly upbeat take on a day when most of the rugby stakeholders went into a keening mode.

“I don’t think it will be negative. I think they will rally round. They will want to make sure he finishes the season on a high and do everything that he has done proud and finish the season for him well.

“I think they are professional enough to know there will be change. But if Connacht gets their decision-making right, it could be a positive change.”

Lancaster also absolutely ruled out a move to Bristol with Lam, although his name had been linked with the job. The prospect of him moving west now that there is a vacancy in the Sportsground, or remaining in Leinster for next season, was in turn less thoroughly denied and more thoroughly evaded.

His principal certainty about life in the RDS was declaring a continued and focused interest in Leinster’s match on Friday and the integration of the returning international players as they prepare for the visit to Franklin’s Gardens. As for next season it’s hanging.

“It’s probably worth clarifying that because I’ve seen my name linked with that, I have never had one conversation with anyone from Bristol at all at any point,” he says. “So don’t believe all you read in the media. My understanding is Pat will probably be going as head coach.

Lam, he knows, is going to a club that will suit his skill set. If the Samoan has created a reputation as a coach that can a take a small club with relatively modest means to league finals and some cherished days in Europe, then he possesses something of value.

Bristol looks to old-school values and builds on trust and local support and the goodwill of the surrounding hinterland.

“I know Jordan Crane really well, the captain,” says Lancaster. “I used to coach him and I texted him the other day. He says the players are still tight. So he [Lam] is walking into a good set-up.

“He’s got a chance to build something that can be sustainable in the short term and the long term. That is what Pat has obviously done at Connacht. So he seems a great fit.”

And so it goes. Lam will look after Connacht’s here and now. The future is for someone else.