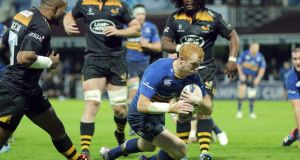 Darragh Fanning scores a try for Leinster as they come back to beat Wasps in their European Champions Cup clash at the RDS. Photograph: Morgan Treacy/Inpho

Leinster merely won a must-win match to launch their latest European campaign, and there was merit and satisfaction to be had from a brave and composed recovery after falling 20-8 behind. Their leaders stepped up to the plate in the second-half, which they won 14-0, although there will be misgivings about the failure to obtain an attacking bonus point and deny Wasps one.

Ultimately, they kept their nerve and restricted Wasps from inflicting further damage. They stuck to their attacking shape and beliefs and managed to manufacture the tries to pull through, although there will be misgivings about the performance.

As was shown in the defeat to Munster, Leinster had real issues in defence, particularly around the fringes. Their attacking game, which flitted between good and bad, was not helped by sloppy inaccuracy at the breakdown.

There was, however, some superb clearing out and Michael Bent and the scrum stood up pretty well. Jimmy Gopperth played very, very deep, a sign perhaps of dented confidence, yet he ran as hard as he ever does and set up one try beautifully.

That Leinster are not scaling the heights of their glory years is, of course, understandable. Retirements, departures and injuries all contrived to leave them with just three of their starting XV from the 2012 Heineken Cup triumph at kick-off yesterday.

One of that trio, Jamie Heaslip, was yet again the rock on which this comeback was constructed, putting in another selfless 80-minute shift. The match stats made him Leinster’s main carrier, with 23 for 53 hard-earned metres, and leading tackler, with a dozen. Statistics, damned lies and statistics? Not in Heaslip’s case, for in addition to the work-rate there was the quality of his workand his leadership. Along with this, there was the importance of some of his big plays.

Although he had one fumble and missed three darts, Sean Cronin was immense, particularly with his lines of running. Along with the back-row, he took up the carrying slack in the absence of Cian Healy and Sean O’Brien.

Gordon D’Arcy had another big game, both in attack and defence with some typically wondrous footwork. He has now emerged as a viable option at 13 as well as 12 for Joe Schmidt. Darragh Fanning chipped in with two tries while Ian Madigan was a regular source of impetus.

Like both Munster and Ulster the day before, Leinster opened the scoring through a Madigan three-pointer after one of several clever line-out variations and a multi-phase attack. Andy Goode then landed a brace of penalties after Cronin’s fumble and overthrow, and when Rhys Ruddock was penalised for not rolling away.

However, worse followed when Leinster sought to go through the gears after Eoin Reddan’s quick tap. Noel Reid took Gopperth’s skip pass and sought to play a short inside ball to Darragh Fanning, but Wasps centre Alapati Leiua read it well and after a juggled intercept ran 70 metres untouched to score. Goode’s conversion made it 13-3.

Cue Jamie Heaslip. Joe Simpson’s box kick went out on the full and when Leinster set up a midfield target through Noel Reid off the ensuing line-out, Heaslip showed wonderful leg-pumping determination to break Joe Launchbury’s tackle and critically draw in Elliot Daly and Miller from full-back. From the quick recycle Gopperth ran onto Reddan’s pass, weighed up the options and grubbered the ball from outside the 22 for Fanning to score.

But defensive holes remained, and with the referee playing a lengthy advantage from a collapsed Wasps maul, Daly worked the ball wide to Christian Wade. He stood up to Madigan and beat him on the outside in a narrow corridor. He then evaded the attempted covering tackles of Fanning and Zane Kirchner to score a breath-taking try.

Goode then converted from the touchline for a 20-8 lead. Leinster badly needed the multi-phase attack off another clever line-out variation with runners and decoy runners off the tail. Cronin then appeared to have scored before Madigan closed out the half with the ensuing penalty.

As the game resumed, the home side were hanging on by a thread as they withstood a 13-phase assault before Simpson was charged down by Devin Toner and Jack McGrath won the ball on the deck.

Leinster went through the phases, Cronin making a couple of strong carries, before Heaslip turned slow ball into good with the help of a big clear-out by D’Arcy and Toner. Fanning went low and scored from close-range, with Madigan then making it a two-point game.

The feeling of it being a turning point was reinforced after Cronin made a break with a line from deep onto Reddan’s jinking snipe. A few phases later Dominic Ryan carried hard and reached out for the line superbly, even if TMO Derek Bevan took an inordinate amount of time to confirm as much.

1 Former France and Stade Francais winger Dominici has died aged 48
2 No further players to be called up to Ireland squad to face Georgia
3 Gerry Thornley: Ireland don’t want to box themselves into a corner
4 Owen Doyle: Ireland suffered from officiating of the breakdown
5 Thomas Galligan and Cavan raring to meet Dublin in Croke Park
Real news has value SUBSCRIBE