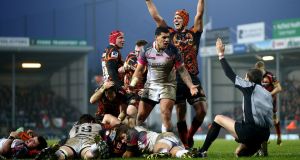 Exeter Chiefs are through to the Champions Cup quarter-finals after a sensational set of results in Pool Two. Photograph: Inpho

Exeter coach Rob Baxter was left to reflect on “an incredible finale” after his team secured an unlikely place in the Champions Cup quarter-finals after Clermont Auvergne got their sums wrong in the most dramatic finish to Pool Two.

The Chiefs’ 33-17 bonus-point victory over Ospreys at Sandy Park saw them through on points difference after both teams and French challengers Bordeaux-Begles all finished level in Pool Two.

Bordeaux claimed a surprise 37-28 win away to Clermont. The home side would have won the pool if they had secured a losing bonus point but they failed to realise the significance of a last-minute penalty awarded to them in front of the posts and, instead of going for goal, scrumhalf Morgan Parra took a tap and go as they ran the ball in a vain attempt to score a fifth try.

The three-way tie on 16 points was separated under tournament rules by results of games between the three clubs, with Exeter and Bordeaux then still tied on 11 points, which meant points difference being utilised and ultimately working in Chiefs’ favour.

Exeter ran in five tries – two each from outstanding wing James Short and number eight Thomas Waldrom, plus a Don Armand touchdown – to triumph, with Dungannon-born outhalf Gareth Steenson adding three conversions and Will Hooley one.

Baxter said: “I am obviously delighted, but delighted more for the players than anything else.

“Qualifying out of this pool today was very unlikely. Anyone who laid a bet on it has probably made a fortune!

“We talked about the character we wanted to show and what we wanted to take out of the game. We didn’t expect to be winning the pool, but the players put in a fantastic shift and got a real tangible reward for it.

“We knew the score was staying pretty close between Clermont and Bordeaux, and it all started getting really confusing. We didn’t know if we needed to kick the ball off the pitch at the end or score another try.

“It has been an incredible finale to the weekend.”

Clermont’s defeat ended a 25-game winning run at home in Europe going back to 2008 as they finished bottom of a pool that they could have won if they converted the late penalty.

Clermont, who had began the day two points behind Ospreys, made a dream start by racing into a 14-0 lead after six minutes thanks to tries from Jonathan Davies and Noa Nakaitaci, both converted by Parra.

However, forwards Berend Botha and Sebastien Taofifenua both powered over for tries, goaled by Lionel Beauxis, as Bordeaux drew level and two penalties from Baptiste Serin either side of half-time put them 20-14 in front.

When Damien Chouly and Paul Jedrasiak went over for quickfire tries, Clermont looked to have booked their last-eight berth but Bordeaux made full use of the extra man, with Paulin Riva and Peter Saili scoring tries that broke the hearts of the home fans.

Ties to be played April 8th-10th