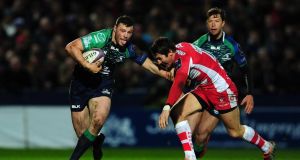 Connacht paid the price for a poor first half when the English favourites Gloucester sealed the first semi-final berth in this year’s Challenge Cup.

The number one seeds did just enough in the first half, and Connacht were left to rue the concession of two soft tries and their own inability to play to potential in that opening 40 minutes.

In the end Connacht left Kingsholm Stadium knowing their did not do themselves justice and wishing there was another five minutes to grab an equalising try as they finished the game attacking the Gloucester line, going through the phases and keeping the ball in hand.

Although Gloucester had looked invincible throughout the pool stages, they were certainly beatable last evening, but they were helped by some early game jitters from Pat Lam’s men.

Kicking errors and two missed lineouts did help with Connacht’s continuity despite enjoying a fair share of possession. Although Jonny May demonstrated his pace early on, it was nothing Connacht could not handle, but by the 18th minute the home side had started to gain a foothold through their pack.

Although Tiernan O’Halloran stifled Sharple’s early attack, the English fullback played his role in the build-up to the opening try on 21 minutes. It came from a Connacht defence under pressure inside their own 22, but Danie Pollman’s clearance was well handled by outhalf James Hook, who broke up field, scythed through two-would be tacklers, before finding Sharples in support. The right wing quickly found May, who at pace raced clear to touch down under the post. Scrumhalf Greig Laidlaw converted for a 7-0 lead.

Connacht, struggling to gain any momentum, may have been harshly penalised at the breakdown, but it provided Gloucester with another attacking foray from a penally to touch and they made it count. Openside Matt Kvesic and Hibbard, always involved, continued to pick and drive forward before Hook’s deft chip bounced horribly for Robbie Henshaw, falling into the hands of the in-rushing Billy Meakes who strolled in from five metres for the second try of the night. The Scottish scrumhalf again converted for a 14 - 0 lead after 31 minutes.

Although losing Muliaina with injury, replaced by Darragh Leader, Connacht did create some opportunities, but they continued to force the play and consequently squandered chances through uncharacteristic errors.

Good work from Henshaw forced a turnover ball, and Connacht sent the ball through the hands, but on this occasion, with at least a two-man overlap, Tom McCartney opted to take the direct route and spilled the ball. The Irish fans in the Shed were again hopeful of a Connacht breakthrough when the ball was sent wide to Matt Healy, but Connacht’s leading line-breaker in the pool stages inexplicably lost possession, which seemed to sum up the Connacht’s poor opening half.

It did not get any better immediately after the restart when Connacht, in possession, were penalised for crossing, but some fine work from Eoghan Masterson at the breakdown was rewarded with a penalty to touch.

The pack initially worked the maul well, but eventually it broke down and once again the home side regained the initiative. Although Connacht continued to dominate territorially and played with more positivity - the scrum being their best weapon, they struggled to make it count. Spurning a 48th minute penalty kick at goal, they went for the line, and while Muldowney secured possession, they found themselves penalised yet again.

Gloucester, deprived of possession, seemed content to soak up the pressure until they could establish territorial control. But when they did, Connacht lifted their game in defence, with two vital turnovers from George Naoupu and O’Halloran keeping the Cherry and Whites out.

Laidlaw’s 61st minute chance to post their first second-half score sailed wide, providing Connacht will real hope. Aly Muldowney and Naoupu continued to lead the troops up front and from another penalty to touch, they made the deserved breakthrough. Muldowney secured possession from the lineout before passing the ball down to Masterson, and when the drive was set and unstoppable, Henshaw, having joined the maul, broke from the back to touch down. However referee Raynal awarded a penalty try, and Carty converted to open Connacht’s account in the 65th minute.

Having kept the home side scoreless for the second half, and with only one score between the sides, the game erupted into life. Connacht, with possession, were turned over in the tackle inside the Gloucester half, but with five minutes left Leader forced a penalty at the other end.

Bernard Le Roux cleared to face Ireland on Saturday after disciplinary hearing 15:55
Johnny Sexton: ‘We just know we have to be a lot better in all areas on Saturday’ 15:43
Harrington keen on breaking her Breeders’ Cup duck at Keeneland 15:16
Neil Lennon brands criticism of Shane Duffy’s Celtic performances ‘hysterical’ 14:58
19 Premier League clubs sign up for new FA diversity code 13:52
Crossword Get access to over 6,000 interactive crosswords