Champions Cup round-up: Toulon bounce back to see off Leicester 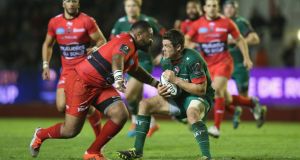 Saracens made it back-to-back wins over Sale to move top of Pool One in the European Champions Cup, but missed out on a bonus point as they won 28-15 at Allianz Park.

Alex Goode crossed in the first half for the hosts but Nathan Hines responded with a score of his own as a stubborn Sharks side refused to roll over despite being already eliminated from European competition.

Owen Farrell kicked 13 points for Sarries and after Ben Ransom went over for their second try just before the hour mark there appeared plenty of time to chase what could have been a vital bonus point.

But it was only with five minutes remaining that Billy Vunipola crashed over for their third and Sale held off the late charge and even claimed a late score of their own through Eifion Lewis-Roberts.

Saracens currently top Pool 1 ahead of the meeting of second-placed Clermont Auvergne and Munster (third) on Sunday.

Leigh Halfpenny’s metronomic boot helped Toulon to cruise past Leicester 23-8 and avenge last week’s defeat to the Tigers in the European Champions Cup.

But the Top14 side exacted their revenge in style at a noisy Stade Mayol, with Ali Williams and Mathieu Bastareaud scoring tries, while Halfpenny added a 13-point haul on his return to the side.

Blaine Scully crossed for the Tigers on one of the few occasions Toulon were breached, while fly-half Owen Williams — who kicked 20 points in a fine display when these sides met last week — endured a difficult afternoon as Leicester toiled.

Victory takes Toulon five points clear of Leicester at the top of Pool Three and they will now be firm favourites to progress after bouncing back to underline their credentials.

Toulouse completed a double over Glasgow Warriors to leave the Scottish side in trouble in Pool Four.

The French visitors to Scotstoun, who came away with a 12-9 victory, have a firm grip on top spot, but Glasgow are looking at needing bonus-point wins from their two remaining matches - against Montpellier and Bath - to go through to the knockout stages.

A proud record of never having lost in Scotland was kept intact by Toulouse, who beat Glasgow for the seventh time in eight matches and for the second weekend in a row.

Racing Metro held off a rousing Ospreys fightback to all but end the Welsh side’s European Champions Cup aspirations with an 18-14 result at the MMArena.

Tries from wings Juan Imhoff and Teddy Thomas, plus five points from Johan Goosen had the French side in total control in Le Mans.

The Ospreys roared back as Rhys Webb and Eli Walker scored tries, converted by Dan Biggar, but Goosen’s late penalty killed off their chances.

The result left Racing one point behind pool leaders Northampton, who hardly broke sweat as they stayed firmly on course to reach the quarter-finals by thumping Treviso 67-0 at Franklin’s Gardens.

The Saints, with their juggernaut wing George North in destructive form on his first appearance since being concussed during Wales’ clash against New Zealand three weeks ago, had a bonus point wrapped up inside 35 minutes.

And it proved to be their record European win, smashing a 68-21 success against another Italian side — Overmach Parma — during the 2006-07 season.

North, his leg strapped, went off early in the second period — his departure looked precautionary — but there was no let-up from Northampton as further tries followed for George Pisi, Ben Foden, two more by Ken Pisi and a 13-minute hat-trick for substitute forward Samu Manoa, while Myler finished with four conversions and fullback James Wilson two.

English champions Saints’ 11-try haul took them to 15 points in the group, and victories in their final two pool games next month away to the Ospreys and at home against Racing will guarantee a last-eight place.

Bale and Dele Alli score as Tottenham qualify with draw in Austria 21:12
Connacht use visit of Benetton to give as many players as possible match time 20:51
Celtic surrender two goal lead in AC Milan defeat 20:16
Fans told not to excessively sing or hug as Premier League crowds return 20:02
Gillane’s chances of playing against Waterford rated ‘50-50’ 19:20
Crossword Get access to over 6,000 interactive crosswords