Getting advantage at pool stage should come home to roost 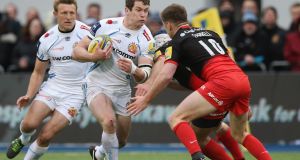 Wasps were hugely impressive in negotiating their way to what was described beforehand as the ‘pool of death’ including former champions, Leinster and Bath, and the three-time and reigning champions, Toulon. It was not just winning the pool but the manner in which they accomplished it with a compelling brand of rugby.

They have won six of their last seven knockout matches in Europe including all three against fellow Aviva Premiership opposition. The Chiefs were the only side to come through the pool stages without winning a game away from their home at Sandy Park. This is their first quarterfinal in the premier European competition but they have been going superbly in the Premiership and are currently second, two points ahead of today’s opponents.

The battle between the two outside centres, Elliot Daly (Wasps) and Henry Slade (Chiefs) would be worth the admission money alone. Two Ulstermen Ian Whitten and in particular Gareth Steenson will have big roles to play if Exeter are to cause a shock. Home advantage is significant and Wasps should progress in what will be a hugely entertaining tussle.

Racing 92 cruised through their group before succumbing to a final pool match defeat in Glasgow, which meant nothing in tangible terms.

The Parisian club were beaten at home in the quarter-finals last season and recently lost a French Top 14 match 21-20 to Toulon in their backyard on foot of Freddie Michalak kicking a late penalty.

All is not well with the three-time and defending European champions, who are missing a number of key players through injury and even their owner Mourad Boudjellal, normally so bullish, conceded: “The match against Racing does not worry me because for me it is already lost.

“After the (Clermont) game (they lost 19-18), I do not know how we could win. Colombes is perhaps not the most beautiful place to die but we will deal with it.”

There is no doubt that Racing are a better team than last season, more mature in rugby terms, more confident and with a fit and happy Dan Carter at the helm.

There’s no Drew Mitchell, Bryan Habana or the match winner when these sides last met, Freddie Michalak, for Toulon.

This could be Toulon’s Waterloo.

It represents the third meeting of the teams this season – honours are even at 1-1 with victory going to the home side on each occasion – and the 11th in total in the history of the European tournament.

The return of Manu Tuilagi has been a massive plus for Tigers’ coach Richard Cockerill as he has provided the team with a different dimension.

Stade are dangerous opponents, scoring more tries (12) than any other team at the pool stage from their own half, the joint leader when it comes to tries scored in returning kicks (five) and the best tackle completion ratio and the fewest missed ones (12).

Stade have kept game breakers like Jules Plisson and Hugo Bonneval on the bench and have picked a physically big team to combat the home side. Tigers have gone with Freddie Burns rather than Owen Williams at outhalf.

This match could be the one to provide an away win if the French side turn up mentally and physically.

Saracens have come very close over the past couple of campaigns to winning a Champions Cup, having lost in the final in 2014 and the penultimate stage last season.

Mark McCall’s team motored through the pool stages undefeated and by kick-off time it will be 904 days since they last suffered a home defeat in the tournament. The synthetic pitch is a significant advantage.

The Saints have won six of their last nine away matches in Europe but on current form few would give them a chance of upsetting the odds.

Saracens are market leaders in a number of attacking categories, while the Saints have gained the fewest metres (288) of any side at the pool stages.

If you factor in the home side’s famous ‘wolf pack’ defence mentality, it suggests a long afternoon.

JJ Hanrahan starts on the bench for the Saints alongside Springbok World Cup winner Victor Matfield. There’s no George North, which is a significant loss.

If Saracens get an early lead then it could be a long afternoon for the visitors, but if they can stay close then the Sarries bench isn’t that intimidating. Saracens to win.