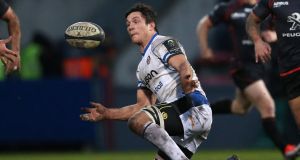 Francois Louw, the Springbok flanker, sounds like a man who lives in the moment, his focus not on some other week or other place but very much this week and this place. Dublin.

His 34 South African caps and influence in Bath seem less romantic than determined. But if, in a weak moment, he did wish to glance to the past, if he did wish to feel warm and glowing or poorly and disheartened, he’d have a choice of two games to ponder, both involving Leinster players.

Louw played against Ireland in 2012 and while the Boks didn’t quite spreadeagle Declan Kidney’s side, they won the arm wrestle 12-16 in the Aviva.

The year before, Louw captained Bath, again in the Aviva Stadium. Leinster had narrowly beaten the Premiership side 13-18 in the Rec in the previous round of the back-to-back meetings. Lansdowne Road was an opportunity but Louw’s side scampered back to Somerset at the end of a 52-27 hiding.

The three intervening seasons represents little other than a Bath rebooting exercise.

“The organisation has come on really fast since then. We’re different players, the squad has expanded and we’ve a lot of new signings that have come in, new coaches. It’s definitely changed and we’ve started to play better rugby.

“We haven’t achieved anything yet. We’re not getting ahead of ourselves but we are exactly where we want to be right now and we’re competing on all fronts.”

Of the team that were beaten in that match in 2011, just four players lined out in their fourth-round European match in 2014 against Montpellier: Matt Banahan, David Wilson, David Attwood and Louw.

“That was over three years ago,” says Louw dismissively. “Some of the boys were still in high school back then and have since played for England. That game will have absolutely nothing to do with this weekend.”

The Springbok is accustomed to the ability of O’Brien and Heaslip. The game he played against Ireland in 2012 was Heaslip’s first as captain. But as tradition has it, players get weary talking about their opponents. Louw politely retains that aversion. “Yeah, yeah yeah. We did, yeah we won,” he says. “Ireland are always a tough side to play, a tough team. Good individual players as well.

“There are a few of those boys in the Leinster side, definitely guys who are going to be threats,” he says. “I don’t think we are going to be too focused on singling out players or developing a game plan around certain players. A lot of the focus will be on ourselves.”

“Very much they [Watson, Joseph, Ford] are going to strengthen the side,” says Louw. “Yes, we haven’t had them for a few weeks because they have been away with England in camp.

“But their goals are very much aligned with that of the club and at training you can see the excitement of those players, the effort that they are putting. You just feed off the energy. I think it is going to be a massive benefit, them coming back in.”

In Bath, it has been a story so far of tough progression. Two early defeats in the pool, back-to-back wins against Montpellier, a heroic result away to Toulouse and a 20-15 reverse against Glasgow in The Rec has been the expression of a difficult coming of age.

“We’ve analysed Leinster over the last few weeks. We’ve seen what they can do, seen where perhaps we might have an opportunity,” says Louw, more confident than dismissive.

Paul Murphy takes over from David Clifford as Kerry captain 20:33
Lampard afforded precious little time to pull out of nosedive 20:37
Joe Marler rules himself out of England’s Six Nations campaign 18:27
San Francisco 49ers increase stake in Leeds United to 37 per cent 18:10
Jockeys shocked and appalled at Viking Hoard case 17:00
Crossword Get access to over 6,000 interactive crosswords