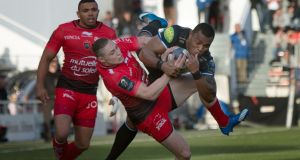 Toulon 12 Bath 9 Bath came agonisingly close to a little piece of history beside the Mediterranean but, barring something extraordinary, their Champions Cup dreams are now sunk. A nerveless 76th minute penalty from Frédéric Michalak proved just enough to save Toulon from their first home defeat in Europe’s elite competition and leave Mike Ford’s team to lament what might have been.

It was a contrary game from start to finish: sunshine and a dry pitch in the monsoonal month of January, no tries but any amount of endeavour, a tale of two rich club owners scrapping for survival. Bruce Craig would dearly love to be in Mourad Boudjellal’s position and bidding for an unprecedented fourth successive European title but at least this seventh defeat in 11 games was an improvement on what Bath supporters have lately had to endure at home.

In 16 previous home games in Europe’s leading competition, Toulon had won the lot and won 14 of them by 10 points or more. Their 32-6 defeat to Wasps in Coventry, however, had left them little margin for error in this rescheduled Pool five fixture and for long periods it seemed the champions might be about blow another gasket. Had George Ford, who had already landed two splendid drop-goals, not narrowly missed a third attempt in the final quarter, Michalak’s late strike following a ruck offence by Bath might have brought only partial salvation.

Boudjellal has also been less than flattering about the form of, among others, Quade Cooper and Ma’a Nonu, two of the more recently-arrived members of his foreign legion. Cooper’s performances were described as being not ‘at the level for which we have recruited’ while Nonu’s efforts to date were dismissed as ‘disappointing.’ Neither did much to alter those perceptions here.

On their high days Toulon’s freewheeling recruitment policy can seem inspired but this was another of those days when too many players appeared to have met only fleetingly beforehand. Cooper and Nonu both waited for the other to spark something meaningful and the Wallaby’s tactical kicking seldom rose above the mediocre. When Juan Martín Fernández Lobbe, one of the world’s great back-rows, seized on a loose ball only to throw it unsympathetically straight at Nonu’s face and prompt yet another unforced error, it pretty much summed things up.

It gave Bath a foothold in the game that their recent domestic form had scarcely enouraged. The return of Stuart Hooper, whose worth becomes glaringly apparent when he is not playing, gave the Toulon line-out plenty of hassle and Ford is finally showing signs of shaking off his post-World Cup slump. A 40-metre drop-goal put Bath 6-3 in front after 28 minutes and, while Toulon went in level at 6-6 at half-time thanks to a second penalty from the scrum-half Eric Escande, the home crowd’s displeasure was palpable.

There was a fair amount of niggle on the field, too, with both captains being told to calm their men down following a mass first-half flare-up. The competitive instincts of the contest’s three Springbok back-rowers – Juan Smith, Duane Vermeulen and Francois Louw – may have had something to do with it. This may be the south of France but South African pride does not recognise geography or context.

The arrival of Michalak at full-back in place of the largely ineffectual James O’Connor, with Cooper switching to full-back, was a further indicator of home disquiet and a second sweet drop-goal from Ford briefly put Bath in front for a third time. Escande levelled once more but the new French captain, Guilhem Guirado, was hauled off shortly afterwards as Toulon searched vainly for the right set-piece combinations.

While Vermeulen, a one-time target for Bath, and Josua Tuisova both enjoyed some productive carries, the sight of Smit, Mathieu Bastareaud and Bryan Habana making a mess of a potential try-scoring overlap on the left gave Bath further heart. Entering the final quarter the game reached a level that had previously eluded it but, ultimately, Toulon’s destiny is back in their own hands.