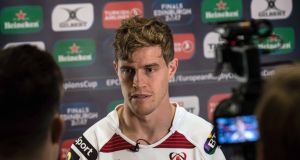 Ulster captain Andrew Trimble: “I think anybody, certainly anybody in Irish rugby, who had any connection to Axel was a Munster supporter.” Photograph: Inpho

It’s a six-day turn around before Munster’s match against Ulster in Belfast on Friday and it could be a question of who is hurting most after physical games last weekend.

For the international players it will be the last weekend spent with clubs before going into Irish camp on Sunday in Carton House and flying out to Chicago on Monday.

And for Keith Earls it could be a long few days. Earl’s red card against Glasgow for a tip tackle on hooker Fraser Brown will be heard this week with a decision hanging on what range of seriousness it will be judged. Earls will make a case for a low-end suspension. Anything more could take him out of initial selection for Ireland. The All Blacks, who Ireland meet the following weekend, will arrived in the USA in three days’ time for a longer US build-up before the Test match in Soldier Field on November 5th.

Since the summer tour to South Africa, Ireland have been together for just a day and a half in August and for 18 hours a few weeks ago.

Joe Schmidt will be keeping a weather eye out for form players and whether Munster can keep their tempo elevated to the level which destroyed Glasgow in Thomond Park. That’s this week’s challenge.

Ulster will also pay tribute to Anthony Foley just as Munster did when Nevin Spence tragically died in a farming accident in 2012. Following Spence’s death, Munster honoured the Ulsterman with a permanent plaque in Thomond Park’s away dressingroom.

“It was a hair on the back of your neck standing up kind of an afternoon at Thomond Park. It was a big ask for Glasgow to go there with all that emotion and intensity. We are going to have to dig deep next week and try and match that.”

Ulster are still waiting on a number of injuries with Iain Henderson leaving the pitch at half-time in Belfast, Pete Browne shipping a head injury and Rodney Ah You a mouth injury. Ulster will not have an update on the status of Henderson until today.

Dan Tuohy also went off with an ankle injury in his outing with Ulster A while Ulster were pleased tighthead prop Wiehahn Herbst lined out for the first time in nine months for the As. The South African had not featured since Ulster’s Champions Cup defeat at Saracens in January.

Ulster may also have to make sharper decisions. Against Exeter they kicked to the corner four times when points were on. Trimble explains: “I thought we had them on the ropes,” said Trimble. “If the forwards want another go who am I to argue.”

Ulster are excited about Charles Piutau’s outing. “He was quite good wasn’t he,” said Trimble. “He’s a very talented fella; he has an eye for a gap and an eye for a mismatch. He brings the standard of everyone up.”

1 Ireland backrow of O’Mahony, Van der Flier and Stander to be retained against England
2 ‘Your father works for my father’: Schools rugby turning toxic in the stands
3 Triple bogey costs Rory McIlroy as Adam Scott prevails at Riviera
4 Newcastle feel the heat as Arsenal get some of their old mojo back
5 On healing and wild hurling: The re-education of Diarmuid Lyng
Real news has value SUBSCRIBE