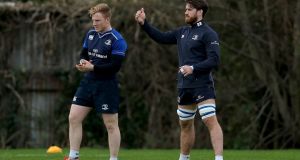 Amidst a Monday morning of further exodus, an interminably long injury list and a concussive non-concussion, the stain from Leinster’s record defeat in Europe also needed cleaning up.

They handed Dominic Ryan the mop.

The 51-10 thrashing in Coventry at the hands of Wasps, who lie sixth in the English Premiership, was a stark reminder of just how dull this season had been and still can be for Leo Cullen’s seemingly regenerating squad.

The facts don’t lie: Wasps have put 84 points on Leinster over two record-breaking, home and away, losses.

On occasion Ryan can still be found among the glut of backrows at Leinster’s disposal. He doesn’t join Jamie Heaslip, Sean O’Brien, Rhys Ruddock and Josh van der Flier in Carton House this week – at least he got, along with Jordi Murphy, an up close and personal view of the latest masterclass in breakdown work by George Smith this Saturday past.

The 35-year- old Wallaby centurion heads into Eddie Jones’s England camp to show them how to take candy from babies while the 25-year-old Ryan becomes a senior figure for Leinster’s daunting trip to Rodney Parade to face the Dragons on Friday night.

“It’s easy to say we had nothing to play for and they did but we have big standards here at Leinster and it was unacceptable to say the least,” said Ryan.

“For me, personally, it’s hard to play well in a team that’s getting bashed but there are a lot more games in the season for me to show what I can do.”

“It would be easy to brush it under the carpet and while we will look back briefly at it, it is very important to remember the momentum we were building before that.” Ryan means those victories over Munster, Connacht, Ospreys and Bath.

“It did happen . . . but maybe it was one of those days we should forget about.”

Leinster have never used so many players in a season. Cullen noted that only “15 to 20” were around for training this week. The Academy stocks will be plundered because three foreign recruits – Isa Nacewa, Hayden Triggs and Tom Denton – are also injured.

“Isa Nacewa last week had a small procedure done to his knee so he’ll be out for two to three weeks,” said Cullen. “Royce Burke-Flynn, who has been with us this season, had neck surgery last week so he will be out for four months.

“Of some of those other players, Mike Ross, Cian Healy, Collie O’Shea they are rehabbing away after a couple of niggles and are probably a couple of weeks away yet. Tom Denton was due to be involved in the game at the weekend, he broke down in training on Thursday . . . he’ll be a couple of weeks.

“So, with that list and those guys away, plus there are four or five Academy guys in the frame for selection [for the Ireland under-20s where James Ryan was named captain following an impressive showing for Leinster A against Rotherham at Donnybrook on Friday] so you are talking 30 to 35 players unavailable for training today and more than likely selection this weekend.

“It’s a big challenge for us this Friday against the Dragons. It’s fair to say they are not going to be missing anywhere near that number of players.