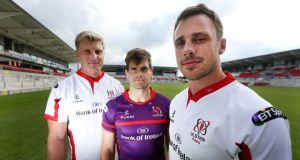 Franco van der Merwe, Louis Ludik and Tommy Bowe at Ravenhill on Wednesday night for the launch of the new kit for the season. Photograph: Inpho

Ordinarily it would have just been a run-of-the mill shirt launch for Ulster’s new season but then things have hardly been functioning that normally of late around the now rebranded Kingspan Stadium.

With last month’s somewhat dramatic departure of director of rugby David Humphreys to Gloucester and then the aftershock seeing coach Mark Anscombe being shown the door, on this month’s first day back at pre-season, allowing interim appointment Les Kiss to now oversee matters, there was little prospect the players’ first opportunity to speak about the apparent off-pitch turmoil at Ulster was going to pass unnoticed when some of them – including new signings Franco van der Merwe and Louis Ludik – appeared last night at the stadium to promote the new-look shirts.

Darren Cave – a late replacement for last night’s event as Chris Henry has undergone minor surgery for what is believed to be a long-standing elbow injury – must have known what was coming and as a senior player stoically fielded the queries and good-humouredly took the barbs over his wearing of Ulster’s rather noticeable purple away kit.

“It was the day of the first Test match in Argentina (for Ireland) and at lunchtime when I got a text from Stephen Ferris and that was the first I heard about David Humphreys (leaving),” Cave said.

“We were all very shocked and there was no hiding that, but we were focusing on the games over there at the time ands I think it’s all credit to Shane Logan (Ulster Rugby chief executive) and the other powers that be at Ulster for making some gutsy calls but I think they’ve got some good people in good places.

As for Anscombe’s sudden exit, the centre adds that he was not around the stadium at the time due to having had surgery on a shoulder problem – he reckons he will be ready to play a couple of weeks into the Pro 12 – and, instead, is eager to focus on putting a rather more positive slant on things.

“I’ve always had a great relationship with Les,” Cave adds, referring to being exposed to his style of coaching at Ireland squads since the Australian was brought on board at national level by Declan Kidney, “and I think he’s an absolutely fantastic coach.

“We can now only look forwards,” the seven-times capped Ireland international added, “and all I can say again is how excited I am about working under Les.”

The 27-year-old was, of course, the first man to take possession of Ireland’s number 13 shirt – the injury to Robbie Henshaw removing an immediate and more fancied rival - after the end of the Brian O’Driscoll era which saw Cave play both June Tests in Argentina, though the second Test saw him shift inside to play 12.

There’s no escaping the fact that he felt that the run-out at inside centre in Tucuman hardly did his national cause any favours but, clearly, the only show in town now is just to nail down a place with Ulster and then see what develops from that under Kiss’ watch as Cave and Ulster seek to put a turbulent summer behind them.