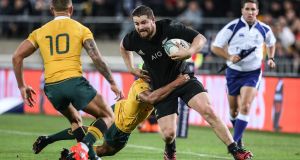 All Black Dane Coles: “I take a lot of pride in my line-out throwing. As a hooker, you’ve got to nail your own set pieces.” Photograph: Martin Hunter/Getty

Dane Coles’ ball skills are such that, as Joe Schmidt has noted, were the All Blacks hooker to have a “1” in front of the “2” emblazoned on the back of his jersey, it wouldn’t look remotely out of place. And, damn and blast him, among his career highlights reel would be, of course, that pass to Ryan Crotty in the final play at the Aviva Stadium three seasons ago that led to dashed hopes and a last-minute try for New Zealand.

So it makes sense that Coles is often deployed in the wide channels as a playmaking, quasi-centre. In this year’s rout of South Africa in Christchurch there were no less than three passes from him that concluded with tries.

“I’ve worked on them but I think it just comes with my childhood. When I was a young fella we never restricted ourselves in terms of what positions we played. We just used to throw the ball around willy-nilly and have fun. We were always playing with a rugby ball and I think that just transfers into how I play the game now. I’m also pretty lucky in that the gameplan we have now suits my style. When I get the ball I just get excited and have a go. It’s pretty fun,” he says.

These are the best of times for Coles. Widely regarded as the best hooker in the world, last year’s World Cup has been followed up by him captaining the Hurricanes to their maiden Super Rugby title after 21 years, being named Wellingtonian of the year, and being part of the All Blacks’ record-breaking Rugby Championship success and 18-match winning sequence.

Last week Coles became a dad for the second time when his wife Sarah gave birth to Reef, their second boy after two-year-old Jax. “I’m going to be in the bad books for a bit but, nah, she had good family support, which was key for me.” All of his and Sarah’s family live in Wellington, and Sarah’s parents have been staying with her.

In previous interviews, Coles has stated that his parents, Sonya and Steve, have been the biggest influences on his career. “As a young fella I was pretty passionate about my rugby and they took me all over the place to trainings and matches, always ensuring I had fun, and that I had the right socks and boots. Unconditional love I suppose. No matter the choices I made they have always been by my side.”

Asked why he took up rugby, Coles says because he had no choice. “Yeah, my old man said: ‘You’re playing’. But I just loved it. I just got chucked into rugby and enjoyed it. I had a good bunch of mates.”

He reckons he was about five when he started playing barefoot in the local Paraparaumu club, acquiring his first pair of boots at about seven or eight.

Paraparaumu? “It’s a great place. There’s a big island out that way so there’s a lot of fishing and diving, and a pretty good beach. Just a small community. All my good mates and a lot of family are still there.

“Wellington is quite big and busy, so it’s always good to escape from Wellington, to head back and take it easy for a couple of days.”

Moving on to the Paraparaumu College schools team, Coles began his rugby life as a prop. “I loved my schooling. I probably didn’t apply myself as I would have liked academically. I was probably the biggest kid going around in my school year. We were a lot of small little white boys, so I got chucked straight into the frontrow.”

He says he was about 14 when, one day, the schools team were short a hooker.

Making the New Zealand under-17s in 2002 was something of a breakthrough. “I was playing for the Horowhenua province, and making the under-17s from a smaller province made me think I might have half a chance. I’d always said to my mates I’d love to be an All Black. But that was when I thought ‘I want to give this a good crack.’”

Coles moved to Wellington, or “town” as he puts it, and played club rugby with Poneke, and in 2007 was drafted into the Wellington provincial team. He made his Wellington debut at the age of 20, against Otago, at the Westpac Stadium.

Two years later Coles made his debut for the Hurricanes against the Waratahs in what was then the Super 14 in Wellington. “That was a special moment, playing with some legends like Ma’a Nonu and Rodney So’oialo. I remember running out and looking at Rodney and wondering ‘what am I doing here?’ I had all my family and friends there too.”

“Everything I had done had been to get to that moment. I had my mum and dad there, and a couple of my good mates. A very special place to play, Murrayfield. Your first cap, your first All Blacks tie. The whole tradition of doing the haka for the first time, the national anthem, just getting on the field as an All Black. Just a very proud day,” he says.

Along with Hore, who was his fellow Hurricanes hooker until relocating to the Highlanders in 2012, another big influence was Keven Mealamu. “He was just a great man. Carried himself very professionally. A very humble man. The thing I’ve learned in this environment is that no matter the position everyone is willing to help everyone, so you become the best player you can be.”

The job he perhaps does best, and better than anyone else, is his line-out throwing, which, of course, made the blips in Chicago so uncharacteristic and demonstrates the collective responsibility of a good line-out.

“Yeah, you think nail it and you have a day like you did in Chicago,” says Coles, still accepting the brunt of the blame. “I take a lot of pride in my line-out throwing. As a hooker, you’ve got to nail your own set pieces. I’m pretty lucky in that ‘Reado’ [Kieran Read] is our main line-out man, and he puts a lot of time and effort into us winning our own ball.

“I do the work during the week and I feel confident come Saturday. It’s something I’ve had to work bloody hard at. When I first started out I was probably the worst line-out thrower.”

Yet it’s one of the most difficult skills in the game, and much like a goal-kicker, requires the player to cope with his own pounding heartbeat in the middle of a game and switch into another mode.

“The biggest thing is probably trying to stay calm. You take a big, deep breath before you get to a line-out, because obviously you’re running around like a headless chicken most of the time. So you just try to stay nice and calm, and go through your process and back your ability.”

“They went out the way they deserved, and it was just awesome to be a part of. Winning the final in Twickenham was something I’ll look back on when I’m older and retired, and have a few beers in the pub and tell a few old stories.”

Cue the Hurricanes’ first Super Rugby title, after losing finals in 2006 and 2015, five semi-final defeats and plenty of lowly finishes.

“I’ve been in that team for a number of years, and I’ve seen that team beaten by loads. There were a couple of bad years. To finally get up there made you very proud to be a Hurricane, because there were a lot of Hurricanes before us who tried to do it but just couldn’t get across the line. It was a monkey off our backs.”

Off the pitch music is a big passion. He lists John Farnham as his favourite singer/band. If he hadn’t been a rugby player he reckons he’d have been the Red Hot Chilli Peppers’ drummer. Top of his wishlist is to go to Glastonbury and if he could live a day in anyone else’s shoes, it would be Slash from Guns N’ Roses. The guests he’d most like to have at a dinner party include Bob Marley and Jim Morrison, along with Mike Tyson.

“My parents are pretty old school and my old man loves music,” he explains. “I know every word in the CCR [Creedence Clearwater Revival] greatest hits album because my old man played it every time we were in the car.”

“Yeah, I love music mate. I can’t play an instrument. I keep ‘vinyls’ at home. I’ve got my own turntable.”

Like most players therefore, music is also a big part of his match-day routine. No specific playlist but one favourite. “One song I listen to is Van Morrison’s Dweller on the Threshold. That always seems to crop up every game day. Music is pretty special, and some songs can bring you back to pretty good days or years in your life, like when you were a teenager, and make you smile for a couple of minutes.”

“We’re very privileged that we get to be an All Black. Growing up in New Zealand, every kid wants to be an All Black. It doesn’t last forever, unfortunately, as much as we’d love it too. But it’s very special every time you get to pull on that All Black jersey because there’s so much history. You get your name and the Test match on the jersey. It’s a very special moment when you chuck that jersey on, especially after a great performance. You get to sit in the dressingroom for a while, and just relax with some pretty special teammates.”

He’s achieved plenty, but at 29 there’s plenty more for him to achieve and these may even be his peak years.