‘These guys have done an awful lot for the Crusaders’ 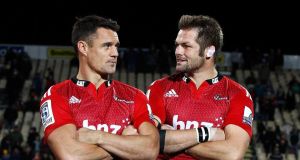 Dan Carter and Richie McCaw pose after the round 13 Super Rugby match between the Crusaders and the Reds at AMI Stadium in Christchurch. Photo: Martin Hunter/Getty Images

Canterbury Crusaders ensured Dan Carter and Richie McCaw bid a fitting farewell to Christchurch in their final Super Rugby match in the city with an eight-try, 58-17 humbling of the Queensland Reds on Friday.

The All Blacks outhalf and flanker have been the heart and soul of the most successful side in Super Rugby for more than a decade but Carter is off to France after the World Cup and McCaw has hinted he will retire.

“The (farewells) were on a bit of a backburner this week in terms of what we needed to do but having said that, these guys have done an awful lot for the Crusaders,” said Crusaders captain Kieran Read.

The Reds have not won in Christchurch since before either Carter or McCaw started playing Super Rugby and they looked unlikely to break that drought from the moment scrumhalf Ellis crossed for the home side’s first try in the third minute.

Slade added the second 15 minutes later, racing 40 metres to touch down after a midfield burst and offload from Carter, who was playing at inside centre, and the outhalf added a penalty in the 32nd minute to extend the lead.

The Reds hit back with a Samu Kerevi try on the stroke of halftime when the Crusaders had lock Bird in the sin-bin but Nadolo restored the advantage with his ninth try of the season two minutes after the break.

The powerful winger intercepted a James O’Connor pass before brushing off Lachie Turner’s tackle to score in the corner. Slade added the extras from wideout and his second penalty put the Crusaders 25-10 ahead after 50 minutes.

Nadolo secured the bonus point when he barged across the line for his second try two minutes later and lock Whitelock ran 60 metres through five tacklers to scored the fifth try before the hour mark, Slade converting both from wideout.

McCaw came on the pitch to a rousing ovation just in time to see his heir apparent at openside flanker Todd score the sixth before replacement back Macilai and Bird completed the rout.

Reds winger Chris Feauai-Sautia barged over for a try a minute from time but it was scant consolation for the 2011 champions, who slumped to their ninth defeat in 11 matches.