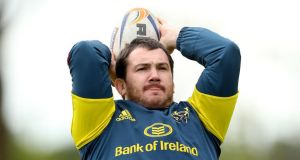 Munster captain Damien Varley: his side were unimpressive against Ulster in their final regular season game of the Rabodirect Pro12. Photograph: James Crombie/Inpho

Munster are angry with themselves and in the past very often that has sparked a response. Yet there have also been times when their League campaign has run aground – like three seasons ago – in the wake of a Heineken Cup exit, and not only has their form hit the buffers but they have only six days to ensure their season does not come to an end away to a comparatively in-form Glasgow this Friday.

The stark contrast between last Saturday’s 17-15 defeat at home to an under-strength Ulster and the 55-12 win in Edinburgh a week before has left Rob Penney and the Munster think tank with a host of selection posers.

“I think players should always be fearful for their places after a performance like that,” admits captain Damien Varley. “Everyone of us needs to look at ourselves and hold our hands up for that type of performance which is completely unacceptable in a Munster jersey.”

Although the evidence is therefore not conclusive, such is the Heineken Cup’s importance to the psyche of Munster home fans and team alike that the sense of anti-climax in light of a second successive semi-final exit appears to still linger.

“I wouldn’t say there is a worry that it is clouding our performance,” maintained Varley. “It is still upsetting. There is a Heineken Cup final on in two weeks time. We would love to be part of it, but we are not. We have to get on with it. We had a great win last weekend in Edinburgh and it is hugely disappointing that we turn up this weekend and play utter s**t!”

Compounded our mistakes
As to why their performance fell into the latter category, Varley said: “I think we should have been more direct and we forced, given the conditions and a terrible night, we didn’t adapt well enough to it. We compounded our mistakes throughout the night. That just never gave us the momentum. We could never get on the front foot . . .”

There must also be a fear that the defeat has damaged them psychologically, although again Varley maintained otherwise if admitting: “It is certainly extremely disappointing that we didn’t show up and I think we were kinda beaten up in areas around the park, more so once again, by stupid, unforced errors . . .”

“I think that allowed them get into the game, silly mistakes like not covering the blindside and they get a try off it. They got a huge momentum change from that, so psychologically I think it is upsetting, frustrating, but I think it has happened to us before going into big games where we have had a loss. That’s the professional game – we have to turn it around . . .”

Be that as it may, Glasgow enter the game on another of their end-of-season runs of good form, having won eight on the bounce, as they seek to atone for successive semi-final defeats away to Leinster. Accordingly, no-one can have any complaints with the bookies making them slight favourites, not even Varley.

“Absolutely. They embarrassed us here at Thomond Park not so long ago. I suppose we had a narrow victory over them earlier on in the year over there. It is going to be a huge game. I think they put 55 points up on Zebre [on Saturday]. I think they will put 55 points up on us if we turn up and play similarly as we did [against Ulster]. It is going to be a long week for us. I think we have a lot of work to do, a lot of preparations because it is going to be an extremely tough task. We try and set our standards in European rugby, but I think this fixture is certainly as big a task and challenge as we have come across all year.”