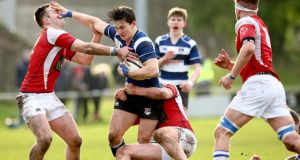 Rockwell College’s defence of their Munster Schools Senior Cup title was ended at the quarter-final stage by Limerick’s Crescent College at Clanwilliam RFC on Wednesday.

At this level it’s all about taking your chances and that’s what proved the difference as Crescent claimed a place in the last four.

Crescent scored a try in each half, fullback Daniel Hurley going over after 16 minutes to finish off some good work by Daniel Feasey and John Blake after an effective break by Bailey Faloon down the wing. Shortly after the break, Niall Mulcahy scored in the corner following some sustained pressure by the Crescent forwards to leave Rockwell attempting what proved an impossible mission.

They did cross the line themselves in the second half, Ben Murray the last man up after an impressive maul which wasn’t the first time the Rockwell forwards had asserted themselves, but couldn’t add to that single-score tally.

The loss of influential flanker Mikey Wilson to an ankle injury shortly before the interval looked at the time a severe blow to the Tipperary school’s chances of staying in the 2016 draw, and so it was.

Wilson’s counterpart for Crescent, Niall Mulcahy, was one of the Limerick college’s key threats throughout this match, his pace and strength and ball-carrying proving difficult to handle.

CBC were deserving winners of a keenly contested quarter-final at the 4G pitch at University of Limerick on Wednesday.

Ard Scoil Rís hit the front with a superb try by their main playmaker Conor Fitzgerald, which he also converted.

CBC kept in touch when Ritchie Cassidy touched down in the corner but his side trailed 10-5 at the break thanks to a penalty by Fitzgerald.

It was score for score early in the second half with CBC taking the lead for the first time with a try and conversion by James Taylor.

Ard Scoil regained the lead with Darren Gavin’s try but the Cork side finished by far the stronger with tries by Ian Casey and replacement JD O’Hea with Taylor landing two penalties.

1 French new wave stay on course for Grand Slam
2 England v Ireland preview: Ireland’s revival to face its sternest test
3 Keeping Donegal on the road to success a costly business
4 Ireland Slam England at the Gardens to open up Grand ambitions
5 ‘Manchester United are lucky to have you’: Klopp responds to Donegal schoolboy’s letter
Real news has value SUBSCRIBE