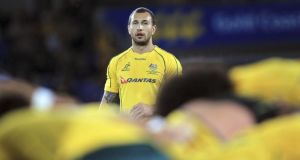 Quade Cooper looks to be in pole position for the Australia outhalf berth to face the Lions. Jason O’Brien/Reuters

Quade Cooper’s chances of playing outhalf for Australia against the touring British and Irish Lions look to have strengthened following a polished display for Super Rugby’s Queensland Reds, while injury and discipline doubts hang over his two main rivals for the number 10 shirt.

Wallabies coach Robbie Deans will name his first 25-man squad for the Lions series next weekend and may find it hard to exclude the mercurial 25-year-old, who had a hand in all four of the Reds’ tries in a 32-17 win over the Durban-based Sharks on Friday.

Last year, Cooper slammed Deans’s tactics in a Twitter tirade and said he would never play for the Wallabies again unless the ‘toxic’ environment surrounding the team was changed.

A contrite Cooper later issued a public apology and re-committed himself to Australian rugby, and has since let his rugby do the talking with the Reds where he forms an exciting combination with incumbent Wallabies scrumhalf Will Genia.

“My thoughts are that the fundamentals of Cooper’s game are in much better shape than they’ve ever been,” former Wallabies coach Bob Dwyer, who secured Australia their first World Cup triumph in 1991, told Reuters.

“His catch and pass and straight running and kicking, if they’re in good shape, then I think we’ll have to have a good choice to go past him.”

Utility back James O’Connor sustained a sternum injury in the Melbourne Rebels’ loss at the Blues on Saturday and although Sunday’s scans revealed no fracture, he is likely to spend up to two weeks on the sidelines, his club said.

The future of Kurtley Beale, the third member of the Wallabies’ so-called ‘Three Amigos’, remains in limbo after another disciplinary breach under the Rebels’ watch.

The 24-year-old missed more than a month of Super Rugby after being stood down for punching two of his team-mates while on tour in South Africa and was suspended again last week for the Rebels’ match over the weekend for another transgression.

Beale broke a no-alcohol rule imposed by team management last weekend and can expect further sanctions when the Australian Rugby Union meets with the Rebels and the players’ association this week.

“This must absolutely be Beale’s final chance in rugby. One more misdemeanour and he should be kicked out,” said former Wallabies hooker and television pundit Brendan Cannon. “I don’t care if he goes to rugby league, AFL or the ballet.”

Doubts over O’Connor and Beale could also open the door for ‘forgotten man’ Berrick Barnes, who returned from injury off the bench for the New South Wales Waratahs in their 21-15 home victory over South Africa’s Stormers on Saturday.

While Barnes has at times been fourth-in-line for the outhalf position, Deans may remember the 26-year-old’s strong performance in the number 10 shirt last year when he helped Australia whitewash Wales 3-0 in a hotly contested series.

Barnes laid off the pass that set up Israel Folau’s late try against the Stormers, then converted it and kicked a penalty from halfway to secure the victory.

The bulky Folau’s match-winning try may move him a step closer to a fairytale entry into the national side after playing only half a season of top-flight rugby union following a switch of codes.

Though the Wallabies do not lack classy backs, the rugby league and Australian Rules football convert’s poise and explosive pace in his first year of Super Rugby has helped put the Waratahs into play-off contention.

Another eye-catching performance against the Canberra-based ACT Brumbies on Saturday could force Deans’s hand to produce a gold jersey for the 24-year-old Folau.