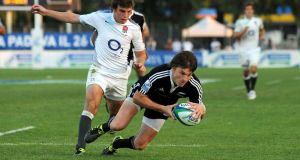 Beauden Barrett of New Zealand scores a try during the IRB Junior World Championship final against England in 2011. Barrett is one of nine from that team on the senior All Blacks squad. Photograph: Valerio Pennicino/Getty Images

The Junior Rugby World Cup class of 2011 may not have much resonance for the current Ireland senior squad as they face into their toughest match of the year.

Of Joe Schmidt’s original selection before the first November international only Ulster’s Luke Marshall and Paddy Jackson were involved in the Junior competition of two years ago.

Marshall has been released this weekend to play with Ulster. Today we will know where Jackson stands in Schmidt’s thinking.

There may have been a case for Craig Gilroy and Iain Henderson, who were both injured, but the brass tacks of the matter is just two players graduated from 2011 to the November Series.

Out in Castleknock Hotel at the beginning of the week New Zealand assistant coach Ian Foster sat beside Sam Cane and Charles Piutau to answer questions. One of those was how the management were able to bring through no less than nine players from their 2011 Junior World Cup winning team.

Current squad
Beauden Barrett, TJ Perenara, Francis Daili and Piutau in the backs and Dominic Bird, Steve Luatua, Brodie Retallick, Luke Whitelock and Cane in the forwards. All of them are in the current squad.

“I think you have got to admire Steve (Hansen) for picking out these guys, especially in the pack, but I think with the culture we have in the team, the guys that come in are helped out,” said Richie McCaw this week.

“In some ways it is easier when you get to All Black level because you’ve got 14 guys around you who are pretty good at what they do.

“You don’t have to worry about anyone else. They just come in and do the things they are picked to do. That’s a big part of our environment.”

Ireland’s golden generation of players may have reconfigured where rugby currently stands in terms of popularity in Irish sport but precious few younger players have been able to break into the squad in the way the All Blacks have been able to do.

Those who missed out in Schmidt’s thinking this time and who played in the 2011 junior tournament are Andrew Conway, Tadhg Furlong, JJ Hanrahan, Brendan Macken, Kieron Marmion, Martin Moore and Jordi Murphy, all well known around the provinces.

Piutau, who may well start against Ireland on Sunday, has begun all three of New Zealand’s tour matches in Hong Kong, Italy and England.

“They always say a few players go through to become All Blacks, but they probably wouldn’t have thought this many would have made it,” said Piutau. “It’s really cool just to see the same faces you came through the grades with.

“For me, growing up and watching Richie (McCaw)and Dan (Carter), seeing them on TV, and now they’re team-mates. You don’t really know how they’ll be as people. But they’re probably the most down-to-earth guys I’ve met and everyone else in the leadership group has made that transition easy for me. I’ve grown a lot as a person, and learnt from everyone around me.”

Special quality
Foster added the management enjoyed the process of throwing in the younger players to see how they were able to step up to the higher level, while Cane, who appears to be the player being groomed to take over from flanker McCaw, said he could tell the group from 2011 had a special quality about them.

“A few guys had already played Super Rugby at 19 or 20, and a lot of the starting team had played ITM Cup already,” said Cane.

“Probably the core group of us first met at New Zealand under-17s, through to the schoolboys, and by the time we got to the 20s we knew each other pretty well.

“It’s great to have seen each other progress since we were 16 or 17, and to be here in the best team in the world and battling it out for an All Blacks jersey is awesome .”

Maybe Schmidt is thinking of redrawing the map more dramatically and if Ireland get beaten badly this weekend, perhaps one of the lessons will be what the best team in the world do off the pitch as much as on it.