Cian Healy may stay at Leinster thanks to investment top-up 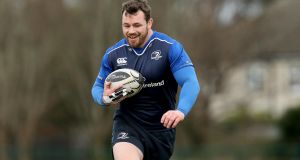 Leinster chief executive Mick Dawson is understood to have intervened with private investment to top-up a deal that would keep Cian Healy in Dublin after talks with the IRFU stalled.

Healy is expected to decide this week between a three-year contract offered by the Worcester Warriors, worth €750,000 a season, a similarly lucrative move to Toulon, or to remain in Leinster on a national contract worth €170,000 less than signing for the English Premiership club.

The 28-year-old prop has experienced frustrating negotiations with the union as performance director, David Nucifora, was on holidays for most of January and therefore uncontactable.

In stark contrast, Worcester head coach Dean Ryan has come over to Dublin to meet the British and Irish Lions prop, who has played 56 Test matches since his international debut in 2009.

Healy returned from a knee injury last weekend and is due to feature for Ireland off the bench on Saturday week as Jack McGrath has nailed down the number one jersey during Healy’s absence through injury.

Worcester are primarily funded by millionaire Cecil Duckworth. Currently lying a perilous eleventh of 12 clubs in the Premiership, they continue to invest heavily in foreign players with Springbok scrumhalf Francois Hougaard the latest signing.

Moore recently signed Heads of Agreement with Wasps when no national contract was offered to the 24-year-old tighthead prop. Despite a late intervention, Moore was unable to get released from a three year deal with the English club.

The province yesterday announced the re-signing of 17 players with Healy, Eoin Reddan, Isaac Boss and Hayden Triggs not on the list. Both Reddan and Boss are 35 years old and while it’s unconfirmed if either will be kept on, Leinster are actively in the market for a New Zealand scrumhalf who would qualify for Ireland through the three year residency rule.

Reddan remains the back-up Ireland scrumhalf and it’s been suggested he might have a future in coaching. Triggs was a late recruit this season following Kane Douglas’s decision to return to Australia.