Boy to man an easy conversion 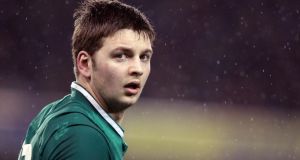 “Jack of all trades, master of none,” says Iain Henderson finding self-deprecation the easiest refuge a few days before Saracens. The one time number eight, occasional lock and current blindside flanker was playing club rugby for Queen’s University a year ago until a spotter in the IRFU liked the cut of his jib and turned him towards steeper trajectory.

A foot soldier beckoned to sit with knights, Henderson was called into Declan Kidney’s squad at the end of October and found himself in the Aviva Stadium less than two weeks later losing to South Africa. Careers have been lost at that speed before but precious few minted so quickly.

“The target at the end of last season was to get towards getting off the bench a couple of times for Ulster, ” says the 21-year-old. “Fortunately for me and unfortunately for Stevie Ferris, he had a few injuries and that gave me a slight opportunity. I played a couple of matches in the Rabo and the Heineken and then kicked on from there.”

The scary thing about Henderson, who now has five caps, is that he’s still maturing physically. A big lump of a student still, he possesses the dog of a lock to be rugged and in opponent’s faces as well as the fitness and athletic ability of a ball carrying flanker. At six feet five and a half, lineouts are also part of the armoury, that in the company of Johann Muller he hopes to expand.

Adolescent dream
Not the normal over reaching sporty school kid, professional rugby was never made available as an adolescent dream and the natural option for Henderson was university. Academically able he was originally offered a place in Edinburgh to study actuarial science but ended up in economics and finance at Queen’s. He went there with a degree, not rugby in mind.

“Coming through schools I was not in any Ulster or Irish schools set-ups, so professional rugby wasn’t an option,” he says. “I had never considered it. It was only after school that it became an option and I kind of exploited it then.

“My dad played rugby and he obviously understands the game and knows quite a lot about it but he is very keen for me to get my studies because obviously the next game could be your last. My parents were keen to push academics and I was happy enough to go along with that.”

In the last six months when eyes were on Craig Gilroy and Paddy Jackson, it was Henderson who signed his first professional contract and after just two appearances for Ulster at European level lined out for Ireland. Already he is smarter, tougher, more able.

Playing a position that demands an abrasive physical presence, he’s not a glimpse of the future but a real part of the present, who has precociously delivered everything asked from him, a try five days ago against Leinster at the RDS framing a more dogged all-round game. He may look like the transition year student with his shy awareness but Henderson has already balanced some of the more difficult equations of backrow play. Judge on appearance at your peril.

“At Ireland you are surrounded by international quality players. You are coming back to Ulster and you have the likes of Johann, John Afoa, even Ruan Pienaar,” he says. “If I thought I had learned everything I would be massively deluded.”

A student then in every sense.