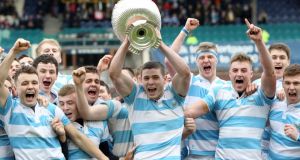 Many moons from now the Clongowes Wood class of 2014 will reunite and remember with justified pride how close they came to dethroning one of the great Blackrock College teams.

This was as close as any final can be. One lunge to the try line and it would have been down to the unerring boot of Alan Hughes to bring the Leinster schools senior cup to Clongowes for the ninth time.

But it stays in Blackrock. Win number 68.

Instead of one last Clongowes charge Seán Kearns was clearing Blackrock’s line with a penalty after a perfectly executed turnover by the hugely effective flanker Conor Oliver.

That the man relieved of possession was Clongowes’ equally outstanding number seven Josh Pim seemed like cruel or perfect symmetry, depending on your perspective.

The heroic defending of Paris transferred neatly to the RDS. For the opening 29 minutes Clongowes somehow kept Blackrock scoreless. You can pick out any one of them but in outhalf Fergal Cleary they had a leader who hit with a ferocity that visibly lifted his team’s morale. Then, more often than not, he would clear their lines with that trusty left boot.

But Nick Timoney and his massive pack of forwards were relentless. Many of them had been a part of last year’s success and they knew to keep the faith. To trust their structures and the maul would eventually yield points.

Zach O’Hagan was denied a try after 11 minutes when Television Match Official Brian McNeice deemed the games’ outstanding player, Jack Power, had delivered the killer pass forward. Why on earth the paying crowd, seemingly trimmed by the 2pm Sunday kick-off, and referee Gary Conway were denied the sight of the replays on the big screens is a mystery.

If you are going to introduce the TMO why not do it the right way?

Anyway, no try. Another near miss for Blackrock came after a thrilling charge by lock David O’Connor but he was stopped a few feet short of the line.

Clongowes supporters went deathly quiet when Cleary needed treatment on his back but he recovered.

When the tries did come they came like a flood. The lineout maul took the attention of the Clongowes pack long enough for Oliver to slip over at the left corner.

Kearns nailed the difficult conversion and before Clongowes could recover, not that they could dig themselves out of their own territory, Power made a magical break and perfectly weighted offload for Hugo Keenan to sprint under the post.

Hughes did stitch a long range penalty on the stroke of half-time but Rock seemed to be in total control.

That was down to an inspirational try by Cleary just after the interval when he carried laterally before weaving and powering over in the same motion.

The momentum seemed to shift irrevocably when, on 51 minutes, Clongowes rapid winger Cian O’Donoghue profited from a fine break and inside pass by Cillian Burke.

It was the calmness of Blackrock that shone through in that final quarter. They had, as Smyth pointed out, rescued victories from defeat against Roscrea and St Michael’s in 2013. This time it was Kearns’s 55th minute penalty into a stiff breeze that levelled it up before the maul delivered the game’s defining score.

Fittingly it was Timoney who rose from a crowd of blue and white jerseys but Kearns missed the conversion, albeit from a tough angle, to leave the door open.

In the helter-skelter endgame Clongowes number eight Stephen McVeigh, Cleary and Hughes were outstanding but it was Blackrock’s time to hold firm. Jeremy Loughman - a professional prop in waiting - and Hugo Kean among others put up an impenetrable wall.

In the 68th minute, O’Connor was penalised for not releasing under his own posts. Cleary ignored the three points and went for the win, kicking to touch.

Rock reversed the Clongowes maul and then Oliver intervened. The biggest pack the schools game has ever seen guided them home in a fitting end to a brilliant game on a never to be forgotten weekend of rugby.