New Munster coach is more than prepared to lead his province 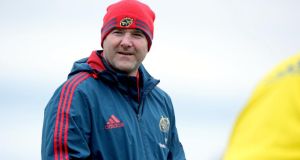 Munster forwards coach Anthony Foley: “I always feel that your unconscious mind should be your guide out on the pitch.” Photograph: Ryan Byrne/Inpho

The plan was evidently to have Anthony Foley promoted as Rob Penney’s successor as head coach from the 2015-16 season onwards but Munster are clearly delighted to have their man a year ahead of schedule judging by Garrett Fitzgerald’s enthusiastic endorsement yesterday.

“He’s a true – I can’t say blue – red Munster man,” said the smiling Munster chief executive, “and always has been for as long as I’ve known him. He’s always wanted the best for Munster. I’ve never seen him any other way. He’s just always wanted the best for the teams he plays for and coaches. He has a phenomenal knowledge of the game, and I think as an individual and a person he is respected by people.”

Fitzgerald would advise Foley to continue being a good listener but also to be his own man. It is not dissimilar to Eric Elwood being chosen midway through Michael Bradley’s final season with Connacht, although therein lies a cautionary tale. Elwood was also a local legend turned assistant and then head coach and found that the head role consumed him even more, which Foley acknowledged is something Elwood has advised him of.

“It did become all consuming for him and that is something that you need your staff around you. You need your manager. Fellas like that will be important to me,” said Foley in reference to Niall O’Donovan, a long-time confidant.

Yet as Fitzgerald also noted being the head coach can be a lonely place “when the-you-know-what hits the fan” and Foley accepts there will be more pressure on him from next season onwards. “You can’t shy away from it. You have to stand up to it. I think we have shown over a period of time in Munster that when it is put to us we stand up, so hopefully I show that in the way I coach as well.”


Coaching philosophy
Asked about his coaching philosophy, Foley said: “I always feel that your unconscious mind should be your guide out on the pitch. At the level we play at, it is very hard to think out there. You have to have a natural game and that is your club. At times we have gone away from that and we have gotten lost and we looked confused out there. At times it seems very natural to us. It is about getting that game which is very effective for us to play.

“I am not going to put us into a bracket, I just want us to play the best game that we can for the players that we have. While doing that, I think it becomes a very effective game . . .”

Foley and Fitzgerald both said that focus would now revert to the upcoming Pro12 games away to the Ospreys and Edinburgh before they could begin formulating the rest of the coaching ticket.

A Foley-Ronan O’Gara dream ticket has been mentioned, while Foley has also worked with current skills coach Ian Costello. Jason Holland is also another figure Foley respects, as is Doug Howlett, who is working with Munster’s promotions department.

Foley was the only one of 22 formal applicants, mostly from abroad, interviewed for the job, and he told his family on Tuesday. “My oldest fella Tony was bursting. He wanted to tell his headmaster in national school. I think Mr McCormack knew before you did this morning.”


One club man
As for his father, Brendan, who also played for Munster and Ireland, Foley said: “He was very happy, delighted. He has been through the system as well. Came through junior rugby, Shannon, Munster and Ireland and he was a one-club man too. He’s delighted. I suppose he’s a quiet man and it’s hard to get reaction out of him at times but he did shake my hand and say well done so I take that as a good thing.”

Foley has already spoken to one former Munster head coach Tony McGahan, and intends speaking to two others in Declan Kidney and Alan Gaffney. His main influences though, have been more the Munster zeitgeist.

“Any player that comes through at Munster will speak about their club and then their school after that. Traditionally it would be their club that would unearth them and give them a sense of community and you see that currently in the group that we have. A lot of fellas cherish that in Munster and that is my foundation too,” he said expressing the hope that his appointment will please plenty of people in Shannon, Ballina/Killaloe and St Munchin’s.