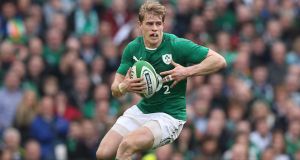 “The moments when I missed it (playing) most was when they (Ireland) won the (2015) Six Nations,” says Andrew Trimble. Photograph: Billy Stickland/Inpho.

Injuries challenge the player mentally and physically. Setbacks double the tariffs. Andrew Trimble suffered a toe injury last October and in February, on foot of diligent rehabilitation, was informed that to resolve the issue, an operation was required.

The surgery didn’t so much signal an end to his season as declare it a washout.

Fate stripped bare his aspirations not once but twice and they were lofty as Ireland’s Player of the Year in 2014 and an integral member of the victorious Six Nations Championship winning team of 15 months ago.

It was his first enforced playing sabbatical to boot.

“No one cares about 2014 anymore, apart from me. The feeling whenever you accomplish something like that is just out of this world.

“The feeling of how you’ve done yourself justice and you’ve been a part of something really special. Just watching it on TV and knowing that those guys were feeling like that, you want to be a part of that. That moment I thought, I want more than anything to get back on my feet.”

Those feelings surfaced again when he watched Ulster dismantle Leinster in a Guinness Pro12 match.

He continued: “That evening I thought ‘this might be a really special Ulster season, the start of a an unbelievable climax to the season when we just kicked on and improved week on week’.

“I wasn’t going to be fit before the end of the season so I always had that window of four weeks to make sure I got fit for the start of pre-season and then you’ve obviously got the five weeks of pre-season to make sure you’re there.”

Trimble, who recently celebrated the birth of a son Jack, focused on the tiny milestones in the rehabilitation process; two weeks on crutches, four in a boot, the first time he got a little bit of movement back in his toe, returning to the gym, starting to do jumps and the moment when he got a glimpse of grass.

He explained: “Week 10, 11, 12 you start getting out there jogging and getting the lungs going again. Over the course of three or four weeks, it develops more into your top-end speed and then changing direction. It sounds a lot more straightforward than it felt at the time. But yeah, I had to do that twice.

“The guy I went to see in London, James Calder the surgeon, he was brilliant. I really appreciated picking his brain and finding out exactly what it was. He broke it down in layman’s terms so I knew what my goals and targets were.

“Any problems that I had that were unexpected, I just went straight back to him. He made the whole process far easier.”

To fight the onset of mental torpor, he trained as a mechanic, alongside team-mate and fellow invalid Iain Henderson.

The pair bought a couple of mini cars. He also did a post-Grad in management choosing a different course to Tommy Bowe because “I think we’ve dragged each other back when we’ve done the same exams in previous years”.

He admitted to being a little relieved but excited when included in Ireland’s 45-man World Cup training squad and that he’ll draw confidence from his last full season of rugby.

“Personally, I know I’ve done it before and I know I can do it again. It was a big challenge for me to get up for 2014 because it was the first time I really felt in the centre of what we’re doing and what we were achieving.

“I was contributing, I was doing my bit. So for me to go from not having done that to doing that was a big challenge. It’s really important that I have that to look back on if ever something big is asked of me in the future. If I need a big performance or to execute a task, I know I can do it because I’ve done it before.

“Hopefully I get an opportunity (to play in the World Cup warm-up matches). If I don’t get an opportunity, I’ll be disappointed. If I do get it, I know I have to take my chance. Joe (Schmidt) talks a lot about how we’re systems driven and I think that’s something everyone takes into account.

“If you can contribute that little bit to the team performance, that’s really important and Joe more than anyone I know, looks at the small details. That’s something I’ve got to keep in mind as well.”

1 Iggy Clarke cherishes the friendships he made while playing for Galway
2 Horse Racing Ireland make their four tracks available to government
3 Nicholas Quinn: ‘Swimming became how I dealt with grief’
4 Ian O’Riordan: The aloneness of the long-distance rider
5 Reality Bites – Tales from the new normal: Caitríona Cormican
Real news has value SUBSCRIBE