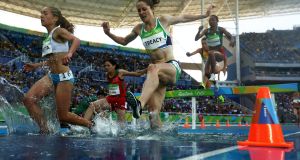 The father of Irish Olympic runner Sara Treacy has described his problems securing tickets for the Rio games through the official Irish channel and how he ended up buying many of them through the Brazilian system.

Liam Treacy said he had tried to call the official Pro10 ticket agent on numerous occasions and that when he finally got through he was told there were not many tickets left.

His story comes as more families and friends recount their difficulties accessing tickets through the Irish system, eventually resorting to alternative vendors.

Sara Treacy, whose family has a long history with Irish athletics, finished 17th in the 3,000 metre steeplechase final. Frustrated by his attempts to secure tickets to witness her achievement, her father told The Irish Times: “I only discovered in February that Pro10 were the agents. I phoned at least six-eight times over several weeks and never got an answer.

“Eventually I spoke to [someone] who told me that most of the tickets were already sold and that I ‘should have called earlier’. I explained that I had called many times.”

In the end he was offered a limited selection of three events, including his daughter’s heat but not the final.

“I ordered by email, had to do a bank transfer for the 18 tickets I ordered. They didn’t take credit cards and had no online ordering facility. We had to wait several weeks before our purchase was confirmed and they had to be delivered by registered post.”

Mr Treacy said he was informed he could only buy tickets from the official agent but later discovered this was not the case.

“The French and Brazilian sites had seemingly endless supply. I purchased further supplies painlessly from the Brazilian site online, paid by credit card and printed them off.”

Elsewhere, a group of friends and family of another Irish runner had to book tickets through a French company.

The party had bought flights in January and made contact with Pro10 immediately afterwards but without success. One of the group, who requested anonymity, said the company initially sent them the wrong link for applications. Querying this with the OCI, she was later sent the correct paperwork, which was completed and sent within the time limit.

After March had passed and without any contact from Pro10, she contacted the company. “I said to them I assume I didn’t get any tickets but I would quite like an email to tell me that so I can go about looking somewhere else,” she said.

They told her they only got in touch with people who had applied by the deadline, although she had.

She then contacted the OCI who replied and attached a list of other European ticketing agents “in case you’d like to contact some of them with ticket enquiries”.

In the end her party bought the tickets from a “very professional, very prompt” French vendor and others at face value in Brazil.

She eventually went online and got her tickets for her son’s event at a kiosk in Rio.

“I found it difficult even to figure out how to get tickets,” she said.