Turf Club to examine if jockey bans too lenient

Pique Sous can score for Katie Walsh at Bellewstown 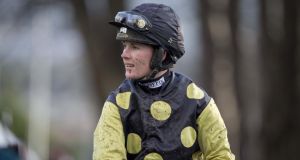 Katie Walsh will team up with Pique Sous at Bellewstown this evening.

The Turf Club is considering if the four-day suspensions handed out to five jockeys after the controversial finale at Leopardstown on Thursday night, when the 50/1 winner Writers Block was allowed build up an unassailable lead in the early stages of a race labelled a “farce” in some quarters, may be too lenient.

Writers Block was over a furlong clear at the half way stage of the amateur riders maiden and never looked like getting caught, passing the line 14 lengths clear of his opposition, headed by the favourite, Cullentry Royal, ridden by top amateur jockey Jane Mangan.

Another high-profile jockey, Katie Walsh, was on the third home, Train Of Thought and the other jockeys suspended for “not taking reasonable measures to give their horses every opportunity of winning” were James Carroll, Katie Harrison and Harley Dunne.

The four-day bans were decided by the racecourse stewards under Turf Club guidelines which allowed them to impose greater penalties if they wanted. The regulatory body are set to examine if the suspensions may be too lenient.

“The guidelines are there and it is totally up to the discretion of the stewards on duty on the day,” the Turf Club chief executive Denis Egan said yesterday. “They decided it was a case of misjudgment rather than anything else. But there is an avenue under the rules to consider the leniency or otherwise of a situation if it’s felt necessary.”

At Bellewstown
Katie Walsh will be hoping for a happier finale at Bellewstown this evening where she teams up with Pique Sous in another amateur riders event.

The Willie Mullins-trained grey ran sixth in the Supreme at Cheltenham and followed that up with a Grade Two success over flights at Fairyhouse but will be ideally suited by fast ground conditions in a heat where Tony Martin’s Cheltenham festival hero Ted Veale is joined by his stable-companion Blackmail.

Jane Mangan is on Encrypted Message for Dermot Weld but fast ground and a mile and half looks a good proposition for Pique Sous whose stable companion Blackstairmountain scored in this last year.

Fast ground could also be the key to the opening juvenile maiden where the in-form Ger Lyons saddles Ubiquitous Mantle.