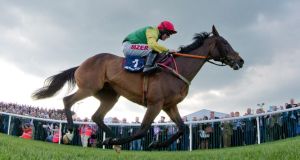 Sizing Europe will have the support of the crowd as he lines out for his fifth Queen Mother Champion Chase today. Photograph: Morgan Treacy/INPHO

Not even the job of keeping tabs on two runners in the Queen Mother Champion Chase is enough to stop Henry de Bromhead anticipating a torrent of emotions during today’s big race.

The Tramore trainer’s bright young contender Special Tiara is half the price of his stable companion Sizing Europe in the two-mile championship, but heartstrings are guaranteed to get tugged when it comes to the veteran superstar boasting one of the most remarkable Cheltenham festival records in modern times.

It will be Sizing Europe’s fifth time to run in the race and a seventh festival appearance in all, a notable tribute to his resilience and quality. And through it all, the horse known simply as ‘Europe’ has wrung the emotional wringer dry.

For the few seconds it took to run to the penultimate flight in the 2008 Champion Hurdle, the rangy bay briefly looked like jump racing’s second coming: but, from travelling like a machine, a jumping mistake wrenched back muscles to such an extent he was all but pulled up.

Back for another crack at the race a year later, he was a late non-runner due to travel sickness. The horse was starting to require excuses that real top-notchers don’t need.

If that was sweet vindication for the man who’d spotted the horse and bought him for Ann and Alan Potts – securing one of Irish racing’s more important patrons in the process – then 2012 left the sour taste of a final fence screw-up which meant the Irish horse had to veer dramatically around the dolled-off obstacle and narrowly fail to Finian’s Rainbow.

“I felt we were very unlucky, and I still do. But I’m actually not aggrieved about it. It’s behind us. There’s no point getting wound up. It certainly won’t be any good to anyone now,” says de Bromhead, whose magnanimity at the time seems even more pronounced viewed through hindsight.

It was Sizing Europe’s presence in second place two years ago that secured Sprinter Sacre handicap ratings to compare with anything in modern times, and even last season, at a venerable 12 years, Sizing Europe ran a perfectly honourable fourth to Sire de Grugy.

The horse had been dismissed as a curio in some quarters before that race, and more so afterwards; which meant his subsequent Punchestown victory got billed as some sentimental send-off for an old-stager no longer among the two-mile elite.

But Sizing Europe’s capacity to bounce back and surprise has been a feature of his career. Any attempt to douse a Gowran win in October in more sentiment looks way off-beam now, considering it was the Gold Cup second-favourite Road To Riches he beat.

Nevertheless, there will be those who view running a 13-year-old – pensionable by normal elite National Hunt standards – in another Champion Chase as tempting fates which can often be cruel around Cheltenham.

However Sizing Europe’s continuing refusal to play with conventional wisdom is witnessed first-hand by the man closest to him.

“The last thing we want is to do wrong by him. But he’s in great form and loves what he does,” says de Bromhead, who, while conceding it will be nerve-wracking, also pays ‘Europe’ the compliment of not painting a fifth attempt at the title in purely cosy terms.

“Of course I want him to come home safe, but I want him to perform too. Even last year he was only beaten nine lengths. And you can forget his last start [Clonmel in November] because I shouldn’t have run him on soft ground. That was my mistake.

“The only real difference with him now compared to a couple of years ago is that he would’ve gone on softer ground in the past. Now he doesn’t. When you get older you get fond of what you’re fond of, and on good ground he’ll be in there pitching again,” says de Bromhead.

Even faster going will suit Special Tiara, winner of Kempton’s Desert Orchid on soft ground at Christmas, and a realistic each-way option to improve on last year’s sixth, two places behind Sizing Europe.

It appears to be Special Tiara’s fate, though, to soldier in the shadow of his stable companion and a combination of the oldest horse in the race and the youngest jockey, Johnny Burke, is an inevitable attention-grabber.

“Johnny is just a very accomplished guy. It has nothing do with his age. He has a real racing brain and is simply a very good jockey who’s had a fantastic first season as a professional,” says de Bromhead.

The temptation is to paint Burke and Sizing Europe in sentiment when framing the race today. However, both appear loath to settle for such roles.