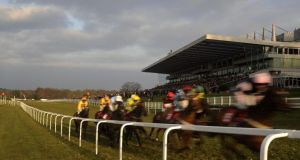 Racing fans eager to see the final rides of Tony McCoy’s record-breaking career at Sandown Park on Saturday will need to book tickets in advance or risk being locked out, Andrew Cooper, Sandown’s clerk of the course, said on Tuesday.

The club enclosure is sold out and with only a few hundred tickets remaining for the grandstand, the track seems sure to reach its capacity of just over 18,000 for McCoy’s last day in the saddle.

“It’s looking increasingly likely to be a sellout, that is the message,” Cooper said. “We’re down to hundreds of grandstand tickets left and that’s it. To be sure of getting in, they need to buy their tickets now.

“We’re working to a maximum crowd of about 18,000, which is the sort of crowd we had for Motivator’s Eclipse (in 2005)and Desert Orchid’s Whitbread (in 1988). In Desert Orchid’s year, we could use the centre of the course as well but now everything is concentrated into the stands. This day and Eclipse day are far and away in Sandown’s year the two that have that potential.”

Cooper will continue to water the track before Saturday’s meeting with little rain forecast. “Everything here is good, good-to-firm in places at the moment,” Cooper said.

“We will keep going with the watering and could water right up until Saturday morning. There are cooler temperatures towards the end of the week and maybe a little rain, and that could help us get a little closer to good, which is really our aim and we’re not far off that now.”

Sandown will present McCoy with a trophy to mark his 20th consecutive success in the British National Hunt jockeys’ championship shortly before his ride on Mr Mole in the AP McCoy Celebration Chase, the only Grade One event on the card.

Mr Mole remains McCoy’s only firm booking on the card, while JP McManus, who has retained him as principal jockey for the past 10 years, has only one more possible runner at the meeting: Box Office in the final event.

Sprinter Sacre, the brilliant winner of the Queen Mother Champion Chase in 2013, will definitely line up against Mr Mole, Nicky Henderson, his trainer, said on Tuesday. Sprinter Sacre was pulled up in the Champion Chase at Cheltenham last month, and has not been at his best since suffering an irregular heartbeat in the Desert Orchid Chase at Kempton Park in December 2013.

God’s Own, the winner of a Grade One novice chase at Punchestown last season, has also been confirmed as a runner in the Celebration Chase by Tom George, his trainer, while Henderson’s Bobs Worth, who took the Cheltenham Gold Cup in March 2013, will contest the Bet365 Gold Cup, the richest race on the card.

“We’ve been saying for the last week or so the intention was to run Sprinter and Bobs Worth,” Henderson said, “and after seeing them both work this morning, that is the plan. I’m very happy with Sprinter, obviously. I wouldn’t be running him otherwise.

“It’s going to be an enormous day all round and the great thing about AP in this instance is that he’s taking the pressure off us and Sprinter for a change.”

There is an outside possibility too that Barry Geraghty, Henderson’s stable jockey, will return from injury in time to ride both horses, although Nico de Boinville, who won the Gold Cup on Coneygree at Cheltenham last month, is more likely to take the mounts at this stage.

Geraghty has not ridden since suffering a hairline facture of his left tibia in a fall at Downpatrick on March 22nd, but said on Tuesday he is optimistic he may return to action at Punchestown’s Festival meeting next week. There is also “a small chance” he will be able to ride against McCoy for a final time at Sandown.

“It’s coming along well,” Geraghty said on At The Races. “I was just with my surgeon this morning and he’s happy with how it is and he’s going to see me towards the weekend and take a view then.

“I’d be very hopeful of making Punchestown next week. It’s healed well so far anyway and hopefully it will stand the test when it comes to it. I’ve had lots of acupuncture and homeopathy. I’ve been working hard on it so I’ve been doing everything I can do.

“I’ll get back in the saddle this week and get busy before the weekend and see how we go. There could be a small chance I’d make Sandown but that’s all.”

Possible rides for Geraghty at Sandown were he to be passed fit include Sprinter Sacre and Bobs Worth.

Vautour, the winner of the Grade One JLT Novice Chase at Cheltenham last month, is increasingly likely to step out of novice company for the first time in the Champion Chase at Punchestown next Tuesday, Willie Mullins, the gelding’s trainer, said.

Mullins rarely sends his chasers into open company until their second season but Vautour produced such a polished performance when easing 15 lengths clear of Apache Stronghold last time out that his trainer now believes he ready to take on more experienced chasers.

“Vautour, on his day, is as good a racehorse as I’ve ever had,” Mullins said. “We’re coming around to thinking that we will let Vautour take his chance in the Boylesports Champion Chase.

“I think I’d prefer Vautour to take it on (rather than Un De Sceaux, the Arkle Trophy winner at Cheltenham, over the Champion Chase trip of two miles) as we have more options with him tactically, depending on what the other horses do in the race. (The front-running) Un De Sceaux has probably only one tactic.”

Mullins also suggested that Hurricane Fly, the Champion Hurdle winner in 2011 and 2013, could step up to three miles for the first time in next Thursday’s Grade One Ladbrokes World Series Hurdle.

Hurricane Fly could be one of three former Champion Hurdle winners in the race, with both Rock On Ruby, successful in 2012, and Jezki, who took the race in 2014, also among the entries.

“I think the trip is no problem and we are seriously coming round to running,” Mullins said. “He won over two-and-a-half miles on heavy ground as a four-year-old in France, so we would think over the years that three miles wouldn’t be any problem.”