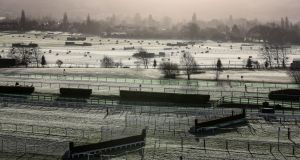 Irish punters are expected to place over €100 million worth of bets during the Cheltenham festival this week Photograph: Dan Sheridan/Inpho

Irish punters are expected to place over €100 million worth of bets during the Cheltenham festival this week, but already, according to some punters, the odds are unfairly stacked in the bookmakers’ favour and becoming more so thanks to new technology.

As gambling increasingly moves online, betting companies are relying more heavily on sophisticated software to identify any threats to their healthy profit margins, and that includes restricting stakes for punters who are on a run of wins.

The practice has attracted complaints to consumer agencies, and it has put the spotlight on the systems betting companies use to clamp down, not just on fraud, but on successful customers.

While reliable figures remain elusive in the Irish context, a group representing the interests of UK punters, which is under the umbrella of the British Horseracing Authority, recently claimed that more than 20,000 customer accounts were closed by bookmakers there in the first half of 2016.

The figure does not include a breakdown of reasons for closure, but it is understood that complete shutdown of accounts is usually reserved for evidence of fraud, laundering or excessive problem gambling, while gamblers on a hot streak are more likely to have restrictions placed on their accounts, forcing them to reduce their stake or cease betting on a particular sport.

“When they did this I was actually losing,” said the individual, who wished to remain anonymous as he did not want his gambling habits to be known.

“I won a good bit before Christmas and then between January and February I had lost a good bit, and it was in the middle of that that they closed the account down.”

According to the punter, when he contacted the UK-based betting operator to complain about his treatment, their response was: “Tough luck, see you later.”

He has since opened up a new account with a different UK-based operator, where he is attempting to use more discreet betting patterns so his winnings do not draw as much attention. “I’m trying to spread [bets] around a little bit,” he says.

Such treatment of relatively successful gamblers comes as no surprise to Dr Koen De Bock, associate professor of marketing analytics at the Audencia Business School in Nantes, France.

He co-authored a recent academic paper on the sector, and knows that betting companies have considerable means at their disposal to identify and reach out to “attractive” potential clients.

Elaborating on the methodology employed, he outlines one approach where the behaviours of existing customers who “generate a lot of profit” are used as a template. The closer a potential recruit conforms to this profile, the more desirable their custom is.

This approach affords little wriggle-room to anyone who is deemed to be a liability, according to Dr De Bock. “They will be actively removed from the customer base,” he says.

Dr De Bock believes these advanced systems of gathering customer metrics should also be used to pinpoint people who have gambling addictions.

The extent to which this is done in Ireland remains unclear, but Sharon Byrne of the Irish Bookmakers Association says there is long-running practice of closing the accounts of people identified as a problem gamblers.

She anticipates that once the drawn-out process of enshrining the new Gambling Control Bill into Irish law is finally complete, the new regulator will have access to companies’ customer data, along with evidence of their dedication to closing problem gamblers’ accounts.

Asked about its policy on account closures, leading Irish bookmaker Boylesports said: “Accounts become closed or inactive for a variety of reasons, including, but not limited to, customer requests, where we detect possible fraudulent behaviour or where betting behaviour falls outside of our terms and conditions.”

Paddy Power refused to comment on the topic when contacted by The Irish Times.

Fianna Fáil TD Niall Collins has called for legislation that forces bookmakers to accept bets up to a certain threshold, as is currently the practice in parts of Australia.

But criticism of the practice has created a marketing opportunity for one UK firm, which set up last year with the promise of never closing or restricting the accounts of “genuine” customers.

Black Type, whose backers include Mylo Sangster, the grandson of the famous owner-breeder Robert, says it can afford to adopt a laissez-faire approach because it avoids costly promotions such as free bets, money-back offers and best-price guarantees.

The company’s co-founder Craig Nicholson says it is to seek an Irish licence this year following expression of interest from gamblers in Ireland.

“We could see a lot of people were being frustrated by not being able to get a bet, and that’s what we wanted to be able to offer to genuine people who are 10-a-penny during Cheltenham,” he says.

*Gamblers Anonymous can be contacted at 01-872 1133 or through www.gamblersanonymous.ie

1 Cheltenham faces criticism after racegoers suffer Covid-19 symptoms
2 Ian O’Riordan: Learning to run for the first time all over again
3 Coronavirus crisis could cost the GAA up to €60 million
4 My favourite sporting moment: Shels finally make all the heartbreak worth it
5 Leaving Certificate PE is a whole new ball game
Real news has value SUBSCRIBE