Jezki the focus of attention for Harrington after fine is rescinded 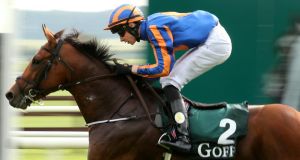 Trainer Aidan O’Brien is targeting a seventh victory in the 2000 Guineas with a four-strong entry headed by Gleneagles. Photograph: Dan Sheridan/Inpho

attention at Punchestown but the trainer’s week has got off to a good start with a successful appeal at the Turf Club against a €1,000 fine over the running of High Tail It at Tipperary 11 days ago.

The JP McManus-owned High Tail It was penalised under ‘non-trier’ rules by the Tipperary stewards and banned for 42 days, while Harrington was fined and jockey Mark Bolger handed a seven-day suspension.

The Turf Club’s appeals committee allowed Harrington’s appeal and also cut Bolger’s penalty to four days after his own appeal was heard.

However, they cautioned the rider for failing to report on the day that High Tail It, a fast-finishing runner-up to Voisey’s Bay in a maiden hurdle, had run green throughout the race. High Tail It’s suspension has been lifted.

Harrington has classic ambitions for her star filly Bocca Baciata in the Irish 1,000 Guineas next month but this weekend sees the classic campaign get under way at Newmarket, and Aidan O’Brien is targeting a seventh victory in the 2,000 Guineas with a four-strong entry headed by the long-time ante-post favourite Gleneagles.

Also remaining among 28 left in the colts classic are Ol Man River, War Envoy and Highland Reel. A notable absentee from the list though is Dermot Weld’s impressive trial winner Zawraq. Instead the Sheikh Hamdan team have supplemented the Newbury winner Intilaaq into the race.

The Roger Varian-trained colt won by eight lengths on his return to action and Varian said: “He won at Newbury like a very good horse and he has trained beautifully since. He has natural speed to be comfortable at a mile but also has the stamina to stay further, which should stand him in good stead in a 2000 Guineas.

Godolphin supplemented Territories, an impressive Group Three winner at Longchamp recently, into the 2,000 Guineas and could also run Belardo.

Frankie Dettori will ride Moheet with Gregory Benoist on The Wow Signal. Both colts are owned by Al Shaqab Racing and the Italian, who last won the Classic in 1999 with Island Sands, appears to have gone for potential over proven form.

The Richard Hannon-trained Moheet has only won a maiden, but ran a race full of promise in the Craven Stakes when third behind stable companion Kool Kompany.

O’Brien also has the favourite for Sunday’s 1,000 Guineas in Found, which is joined by her stable companions Together Forever and Qualify among just 15 left in the fillies classic over the Rowley Mile. Jim Bolger’s Rockfel winner Lucida is an intended starter.

1 Jürgen Klopp insists Liverpool title party is not on his mind
2 Owen Doyle: Creeping professionalism of schools rugby a threat to the game
3 Andy Farrell sidesteps Saracens issue at Six Nations launch
4 Investment in our Olympic hopefuls may be costly – but it’s worth it
5 Gary Neville in Qatar an exercise in semi-journalism
Real news has value SUBSCRIBE