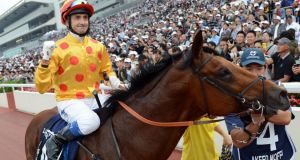 Japanese speedster Lord Kanaloa put up a sensational performance to claim the Longines Hong Kong Sprint at Sha Tin yesterday. Yasunari Iwata’s mount had the perfect position throughout and showed an electric turn of foot to rocket clear at the furlong and a half pole.

The Edward Lynam-trained Sole Power gave gallant chase from an unpromising spot to take a fine second under Johnny Murtagh, but nothing ever looked likely to get close to the winner, who was recording his 13th success from 19 starts. Frederick Engels was third.

Horrible incident
There was a horrible incident close home, with Steve Drowne’s mount Jwala appearing to be squeezed between horses and crashing to the ground. Drowne was thrown to the turf and received medical attention, being taken off the track on a stretcher.

Lynam said of Sole Power: “I am very proud of him. Johnny said he didn’t handle the track, so to run on past those local horses and finish second, it was thrilling. My other horse (Slade Power) was wide and couldn’t get any cover.”

Murtagh was equally thrilled with the performance of Sole Power, and paid full tribute to the winner. He said: “That was a huge run. He’s used to running on straight tracks at home and he’s not the best turning horse in the world and he didn’t come around the bend well here, but it was still a great run.

“The winner is something special.”

Akeed Mofeed, the former John Oxx-trained colt, struck gold in the Longines Hong Kong Cup. Now with Richard Gibson and winner of the Hong Kong Derby in March, the son of Dubawi was heading for a gap up the rail under Douglas Whyte as leader Tokei Halo started to drift off the post, but the pair found their passage blocked as the Japanese challenger rolled back.

Ultra cool
With Cirrus Des Aigles on his outside, Whyte had to be ultra cool but found a willing partner when daylight came as Akeed Mofeed quickened well to collar Tokei Halo and score by a length.

Local runner Dominant lived up to his name to see off British raider The Fugue in a shock result to the Longines Hong Kong Vase.

William Buick had an early mid-division slot on The Fugue but found himself gradually shuffled back and with two furlongs to run was virtually last, just as Dominant, who had raced towards the rear for much of the way, made his move and got what proved a crucial first run.

John Moore’s five-year-old burst clear and while The Fugue picked up strongly to give chase, the line came in time as Dominant flashed home with Dunaden close up in third.

Willie Mullins’s Simenon was a creditable fifth under Ryan Moore