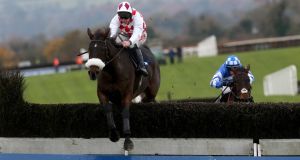 Flemenstar ridden by Andrew Lynch on their way to winning the Fortria Chase at Navan last month. Photograph: Ryan Byrne/Inpho

Champs with plenty to prove.

Ireland’s top steeplechasers served up one of the races of the season in last year’s Durkan when Flemenstar emerged best by five lengths and both Flemenstar and Sir Des Champs are the stand out entries among the 10 left in this weekend’s €80,000 highlight after yesterday’s forfeit stage.

Bookmakers reckon a repeat is likely with Paddy Power making Flemenstar a 5/4 favourite ahead of Sir Des Champs on 9/4, with the latter’s stable companion Arvika Ligeonniere rated only 5/2.

However, Flemenstar was far from convincing on his first start for new trainer Tony Martin, since owner Stephen Curran removed the star chaser from Peter Casey, in last month’s Fortria at Navan.

Ultimately the gelding held on from the fast-finishing Days Hotel but significant improvement is likely to be required this Sunday if he is to again complete the Fortria-Durkan double. Martin has also left Flemenstar in the Grade Two Kerry Group Hilly Way Chase at Cork on Sunday but indicated yesterday the Durkan remains the plan.

“The intention is he will run at Punchestown. I’ve been happy with him since Navan. Of course it would be great if the result was the same as last year but it is a very good race. He could finish third in it and still have run a cracker,” the Co Meath trainer said.

First start
In contrast, Sir Des Champs is coming into his first start of the season relatively under the radar but nevertheless pleasing Willie Mullins who feels the two and a half mile trip is short of his best.

“We were pleased with how he went this morning. I would imagine the two and a half is probably a little sharp for him but it is an ideal start over nice fences,” the champion trainer said yesterday.

Sir Des Champs progressed through last season, winning the Hennessy, and at the Punchestown festival, and in between finding only Bobs Worth too good in the Cheltenham Gold Cup where ground conditions turned against him on the day.

The going at Punchestown yesterday was “good to yielding” and yielding in places and looking long-term, Mullins struck a hopeful chord for Sir Des Champs, saying: “We hope to maintain his form from last year and if we tweak a few things he will be very competitive come March.”

The Durkan has been used in a successful Gold Cup campaign in the past, with Kicking King in the 2004-05 season and Dawn Run scoring in 1985, a few months before her legendary blue-riband success.

Like Flemenstar, Mullins has left Arvika Ligeonniere in both the Durkan and the Hilly Way but has indicated Twinlight is a likely runner in the Cork Grade Two in which Days Hotel is likely to try and follow up his 2012 win in the €45,000 heat.

Mullins has also left in the exciting trio of Briar Hill, Faugheen and Valseur Lido among the 16 remaining in the Grade Three novice hurdle over three miles on the same card.

Goonyella favourite
Jim Dreaper’s Goonyella has been installed a 10/1 favourite by the sponsors ahead of the €190,000 Paddy Power Chase, the handicap highlight on Day Two of the Leopardstown Christmas festival.

Fifth to Cootamundra in the Troytown Chase at Navan recently, Goonyella is currently set to carry 11st 1lb in a race where the weights are topped by the British-based pair, Sydney Paget and Silver Nature who have both been given 11st 10lb.

The Troytown runner-up Mad Brian is on 11st 6lb and also has the option of running in the Grade One Topaz Novice Chase over the holidays.

“We were delighted with him at Navan. He’s in the novice chase but at the minute we’re more inclined to go for the Paddy Power,” said trainer Gillian Callaghan.

“I suppose ideally he’d like a good cut in the ground but he ran well the last day on what was nice ground.”