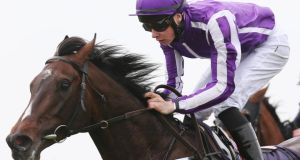 Camelot: can return to winning ways in the Prince of Wales’s Stakes at Royal Ascot. Photograph: Lorraine O’Sullivan/Inpho

It seems to be Camelot’s damned lot to be praised faintly. Rarely if ever can the accomplishments of a triple-Classic winner have been trailed so doggedly by the word ‘but’; mostly as in he’s good but the best of a bad lot. And that ain’t likely to change even if Aidan O’Brien’s star bounces back to winning form in today’s Prince Of Wales’s Stakes.

The reasons are many, the most obvious of which being the three-year-old crop of 2012 dismissed as a bad lot are now just a year older.

Instead the main threats to Camelot look to come from an even older brigade principally consisting of the admirable world-traveller Red Cadeaux, and even more importantly, Al Kazeem, who just happened to beat Camelot at the Curragh a few weeks ago.

Since that was Al Kazeem’s first ever Group One start, defeat was used as another stick to beat Camelot, whose principal fault it appears to be simply being not as good as the Coolmore promotion machine hyped him up to be.

In fact, the only way the colt who fought back from major colic surgery last autumn can live up to some of the claims made for him last year is if he routs this lot by 10 lengths, bows to the Queen in front of the stands and announces he’s running for the White House.


It is true that 2012’s Classic crop were largely uninspired but even the most hype-resistant handicapper must concede that on the evidence so far, Camelot is a top-class racehorse; just maybe not the world-beating ‘best-we’ve-ever-had’ type that his connections made him out to be. And Camelot at his best – and don’t forget only Enke, trained by the disgraced Mahmood Al Zarooni, denied him a Triple Crown – can secure a hugely-valuable Group One win at 10 furlongs here.

To do so he needs to turn around the length and a half with Al Kazeem from the Tattersalls Gold Cup but there are sound reasons to believe he can. Camelot presented a sole and perfect target for his rival the last day but James Doyle hasn’t the luxury this time. And history shows us that O’Brien largely likes to leave something to work with after the Tattersalls. That should be even more the case this time considering the long process of recovery from that surgery last year.

“We’ve done one or two things a bit differently at home and we’re hoping he can improve,” jockey Joseph O’Brien said yesterday. “After what happened last year (colic) sometimes the first time they have a proper race again it can come as a bit of a shock.”

The Fugue, the sole filly in the race, could turn out to be just as potent a challenger as Al Kazeem. But even with the rose-tinted glasses off, and perspective firmly in place, Camelot still looks to hold a first-class chance.

The depth of sentiment urging Chigun to success in the Group Two Duke Of Cambridge Stakes will be massive considering the death of her former trainer Henry Cecil last week. The filly was his last winner in Ireland over the Guineas weekend and Chigun represents a major threat to David Wachman’s hopes of scoring here with Duntle.

Last year’s Sandringham Handicap winner lost out on a Group One victory in the Matron at Leopardstown last year when the stewards took a dim view of her bumping the Cecil runner Chachamiadee but looked as good as ever on her return. A value alternative to Duntle and Chigun, however, may be the French hope Sarkiyla who was an unlucky loser on her last start in a Saint-Cloud Group Two.