Australia set to take on talented field in Juddemonte 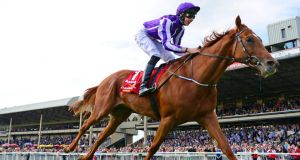 Joseph O’Brien is attempting to make the weight so as to ride Australia in York’s Juddmonte feature. Photograph: PA

Considering how Sea The Stars and Frankel are on the Juddmonte International roll of honour it’s odd to see York’s most prestigious race as something of a stepping stone. But even a cursory reading between the lines indicates that may be Aidan O’Brien’s thinking with Australia today.

The struggle the champion trainer’s son Joseph faces to do his lowest weight in over two years will get a definitive resolution from a stark scales at about 3.30pm. But it’s any excess condition that might be on the dual-Derby winning colt he’s wasting to ride which is likely to prove much more difficult to decipher 10 minutes later.

Australia will be in tip-top shape for his first clash with older horses – and a first run over what’s expected to be a perfect mile-and-a-quarter trip – were repeated yesterday by O’Brien whose four previous Juddmonte victories put him just one behind record-holder Sir Michael Stoute.

“Australia had a break after the Curragh and everything has gone well with him since. Obviously he is a good bit heavier than he was in the Derbys and I suppose that just makes you a little bit more anxious,” he admitted. “So really he is just ready to go away and . . . we would imagine that he would come on a lot for the run.”

That is good news for those pinning their hopes on the Epsom and Curragh classic hero being the star turn of the inaugural Irish Champions Weekend back on home ground in just over three weeks’ time. But it leaves punters today in a quandary.

A pair of top older horses, Mukhadram and Telescope, second and third to Taghrooda in the King George, look to present quite a standard for any horse not quite firing on all cylinders, and with a French Derby hero in The Grey Gatsby also in the mix, this appears to be the greatest challenge faced by Australia since finishing third in the Guineas in May.

A pair of Derby victories following that would put a seal on almost any other equine CV but the reality is that Australia’s career is being judged in the context of his trainer’s famous comments that he is the best he has ever trained. And being viewed through that exalted prism means even a 100 per cent wound-up Australia still has plenty of sceptics to convert, never mind an Australia a notch or two below peak.

Such a prism may be unfair, or even unrealistic, but it was set by his trainer. And a cold reading of official ratings reveals how the Irish colt expected to dominate 2014 isn’t even the season’s outstanding three-year-old.

Kingman’s rampage through the mile division puts him top of the official handicapper’s ratings, just ahead of his stable companion Taghrooda. Crucially, both have faced and beaten older horses, a test traditionally seen as definitive and one which Australia gets now for the first time.

Just 13 of the classic generation have won the Juddmonte in its 41-year history, including other legendary names such as Roberto and Troy alongside Sea The Stars. Frankel’s 2012 rout as a four-year-old set a benchmark for spectacular. This is the level that O’Brien’s comments a year ago automatically meant Australia would be judged by and there’s no getting away from how he still has a long way to go to match up to some of the hype that has swirled around him.

That he’s top-class is not in doubt. But if he can beat an Eclipse winner at his best trip (Mukhadram) and a four-year-old like Telescope who

looks to be improving, while possibly not fully wound-up, then Australia’s reputation will take on a brand new sheen.

That reputation already means he’s likely to start an odds-on favourite. Considering how Telescope was so impressive on the course in last year’s Voltigeur, maybe he is betting value to secure Stoute a sixth win in the race. Get ready though for some serious paddock inspection beforehand.

Stoute is also the record holder in the Voltigeur with seven wins and relies on the Gordon Stakes winner Snow Sky who will test his Leger credentials against a pair of Ballydoyle runners led by Granddukeoftuscany.

It’s a big step up to Group Two from a Tipperary maiden but the colt could hardly have won that easier and O’Brien’s immediate assertion afterwards that Doncaster was in his thinking still looks significant.

Jamaica firmly put his opposition to the sword in a Galway maiden a few weeks ago and should be a major player for Ballydoyle in the Group Three Acomb Stakes where the eight-length Doncaster winner Basateen looks a threat.

Sam Bennett: ‘A green jersey in the Tour de France is such a highlight of my career’ 07:30
If soul-searching was a sport, today’s GAA teams would all be champions 06:00
Matt Williams: The sky is not falling in on Irish rugby - but Ireland do need a new plan 06:00
Superfan John Murphy keen to keep streak going and make it 80 not out in Donegal 06:00
Miss Amulet looking to complete rags-to-riches success at Newmarket 06:00
Here is your handy guide to sport on television this week