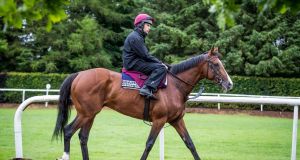 Idaho will run in the Japan Cup on Sunday morning. Photograph: Morgan Treacy/Inpho

The Aidan O’Brien trained Idaho will try to bridge a 34-year gap for Ireland in Sunday morning’s Japan Cup in Tokyo.

Japanese racing’s most prestigious prize has proved elusive to Irish hopes since the Frank Dunne owned and trained Stanerra won the third renewal in 1983.

O’Brien hasn’t had a runner in the mile and a half race since Joshua Tree was unplaced in 2010 but Idaho will try to extend a world record breaking year for the champion trainer who secured a 27th Group One victory in 2017 when Mendelssohn won at the Breeders Cup.

Idaho has yet to win at the top level in 15 career starts and is rated a 25-1 outsider for Sunday’s big race due off at 6.40am Irish time.

Ryan Moore, successful in the race on Gentildonna in 2013, takes the ride on Highland Reel’s full brother who is drawn 14 of the 17 runners.

The Irish hope is joined by the German pair Guignol and Iquitos, as well as Australia’s Caulfield Cup winner Boom Time in the international challenge.

No foreign runner has won the Japan Cup since Alkaased scored in 2005 and no overseas hope has finished in the first five since 2010. Jim Bolger’s Trading Leather was fatally injured in the race in 2014.

In other news, three riders, reported to be the Irish Grand National winner, Ger Fox, top point-to-point jockey Roger Quinlan, and Danny Benson, will appear before a Referrals Committee hearing on Thursday after positive tests for cocaine. The trio tested positive at Galway last month.

On Friday the Turf Club’s chief executive Denis Egan declined to comment on the matter but confirmed a Referrals Committee hearing will take place in Dublin next week in relation to three jockeys who tested positive for a banned substance.

Egan also confirmed an appeal by trainer Mick Winters against the ‘Non-Trier’ penalties handed out after Churchtown Glen’s run at Cork last Sunday will be held at Turf Club headquarters this Wednesday evening.

Winters was fined €6,000 and Churchtown Glen banned from racing for 90 days after the horse ran seventh in a maiden hurdle last weekend. Jockey Barry John Foley was suspended for 21 days and he is appealing the severity of that ban.