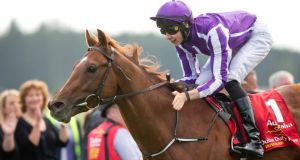 Joseph O’Brien last made the weight in May of 2012 but Ireland’s champion jockey was confirmed as Australia’s rider when half a dozen declarations were made for the Juddmonte yesterday.

Ryan Moore had been on standby to take over from O’Brien if the famously tall Irishman’s struggle with weight was judged too much for him to maintain his partnership with the dual-Derby hero.

However, Moore now remains on board the King George runner-up Telescope, with Richard Hughes stepping in for the ride on the French Derby winner, The Grey Gatsby, and the Eclipse winner Mukhadram also taking his chance. Australia’s stable companion Kingfisher, runner-up to the odds-on favourite at the Curragh in June, has also been left in.

Aidan O’Brien is pursuing a fifth win in the Juddmonte but his son has long anticipated a step back to an extended mile and a quarter may be ideal for Australia who is as short as 4/7 for tomorrow with some firms despite facing an uphill task in terms of profile for the historic York event.

Three-year-olds have won on 13 occasions during the Juddmonte’s 41-year history and only Troy did so on the back of Derby wins at Epsom and the Curragh. Assert was another dual-Derby winner who won at York in 1982 having scored in the French and Irish Derbies. Eight Irish-trained horses have won the Juddmonte with Sea The Stars in 2009 the only one not to emerge from Ballydoyle.

O’Brien said: “He has done very well and is just ready to start back again. I suppose, because he has done so well, we are a little bit worried about his fitness.

“But really, when you give a horse a break – especially a three-year-old – going into the autumn, you want him to do well. He did well, he did very well.”

The O’Brien team have also left Granddukeoftuscany and Indian Maharaja among the 10 horses lining up for tomorrow’s main Group Two support, the Great Voltigeur Stakes, in which the Leger favourite, Kingston Hill, will be ridden by Ryan Moore.

Adelaide provided Moore and O’Brien with a top-flight win in America on Saturday night and initial indications that October’s Cox Plate could be another international option for the colt have looked to be firmed up in Australia by a Coolmore spokesman.

“We had debated to have Adelaide quarantine in Newmarket and come out and run for Chris Waller. But that did not make as much sense as having him quarantine at Ballydoyle, where he could stay in his normal routine with his normal handlers. Rather than have him trained by remote control in Newmarket, that way he would certainly stay with Aidan and be trained right into the Cox Plate by Aidan,” he added.

O’Brien has not had runners in Australia since the controversial 2008 Melbourne Cup when he was called back to the track after leaving to explain to the stewards the front-running tactics used for his three runners in the famous race.

Colm O’Donoghue teams up with Maid Of The Glens in today’s Group Two feature at Deauville but the Irish hope faces a huge task against the French Guineas and Oaks heroine, Avenir Certain.

Maid Of The Glens was seven lengths behind the O’Donoghue-ridden Bracelet in last month’s Irish Oaks but has a top-flight superstar in Avenir Certain ranged against her in today’s Prix de la Nonnette.

Avenir Certain doesn’t have to carry a penalty in her first start since landing the Prix de Diane in June but Maid Of The Glens’ trainer, Pat Shanahan, still expects a bold show.

“It looks a strong race but she ran very well in the Irish Oaks for a filly rated 79. She’s fresh and well and anything between a mile and a quarter and a mile and a half suits her,” he said.