Railway Union hope to upset odds against Ulster side Lisnagarvey 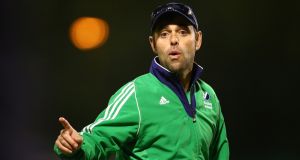 The magnitude of the Irish men’s achievements in 2015 was further compounded this week with Craig Fulton being named the FIH Coach of the Year for his exploits with the green machine.

His side qualified for the Olympic Games for the first time since 1908 before adding a maiden European medal with bronze in London last August. Such breakthrough moments saw him earn the gong, an award that is decided by a vote by all of the world’s coaches.

Fulton’s response to winning the award was typically humble, saying: “It’s much appreciated. This is our award for an unforgettable 2015.”

It added to goalkeeper David Harte being named the FIH Goalkeeper of the Year after a 2015 in which he was named the top shot-stopper at three international tournaments. It was the first time an Irish player has even been nominated on the shortlist for the world award, let alone won.

Railway Union will hope to cause another shock against much-vaunted Ulster opponents when they host Lisnagarvey for whom Irish international Mikey Watt has recently joined.

Pembroke host Monkstown on Sunday with a third different head coach on board. Justin Sherriff takes on the role after Dave Passmore stepped down in November and interim coach Mick McKinnon finished up before Christmas.

Cork C of I versus Three Rock Rovers and YMCA against Glenanne in the other ties.