Wimbledon officials deny courts are to blame for injuries 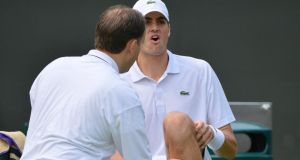 John Isner receives treatment on a knee injury. He eventually had to concede his match against Adrian Mannarino of France at Wimbledon. Photograph: Toby Melville/Reuters 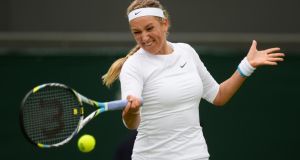 Women’s number two seed Victoria Azarenka has been ruled out of the tournament with a knee injury. Photograph: Mike Hewitt/Getty Images

Wimbledon officials today insisted their courts had been prepared the same way as in previous years as the grass continued to claim victims. Seven players had already withdrawn on Wednesday for a variety of reasons when Maria Sharapova slipped during her Court Two clash with Michelle Larcher De Brito and went on to lose.

The Russian fell in a similar area to where Caroline Wozniacki had earlier fallen foul, and as she underwent eight minutes of treatment, a spectator was heard to shout “Sort the court out”.

That added to a growing train of thought that the grass of Wimbledon may be a factor in the unusual rush of injuries. Tournament officials denied that, though, with an All England Club spokesman telling Press Association Sport: “There has been no change to the way we prepare the courts.”

Former British number one Tim Henman also defended the state of the surface, telling the BBC: “The courts are in the same shape they always have been. It’s bizarre how all these injuries are happening this year. I’m as interested as everyone else as to why there have been so many injuries as the courts are in fantastic shape.”

Victoria Azarenka, the women’s second seed, pulled out this morning after hurting her knee in a first-day slip, while Jo-Wilfried Tsonga, the men’s sixth seed, called time after three sets of his meeting with Ernests Gulbis because of knee and wrist problems.

Steve Darcis (shoulder) had earlier made himself unavailable, while Maran Cilic (knee), John Isner (knee), Radek Stepanek (thigh) and Yaroslava Shvedova (arm) also either quit matches or could not start.

Former world number one Wozniacki went to ground during her loss to Petra Cetkovska and taped her ankles throughout. She would not go as far as blaming the court, though, saying: “I think it’s very difficult to say because I played my first match. Obviously, I slipped on the match point in my first match, too.

“I don’t know if it’s the courts or if it’s just us or if it’s the gripping is different. I’m not sure. You always know that grass is more slippery than other surfaces. You’re prepared for that. But accidents happen sometimes on court. It’s part of sports. You can’t really do much about it. It’s an intense sport.

“Once you slip and once you feel pain you’re obviously more careful. You can’t really run the same balls down. It’s very difficult for me to say if it’s different or not. But things happen. I’ve rolled my ankles on hard court, on clay. So it’s not like you can really point a finger on exactly what happened.”

According to former Wimbledon champion Boris Becker, the problem is not in the nature of the court but the preparation by players. With just two weeks between the end of the French Open on the red clay of Paris and the start of Wimbledon, players have a slender window to get used to the grass.

“A short grasscourt season is definitely part of the problem with the injuries,” the German told the BBC. “Grasscourt tennis is different to other surfaces, it is only two weeks of action after a long claycourt season. Players need to give themselves more of chance. The grass is the same.”

Tsonga would not blame the Centre Court grass for his departure, citing a tendon injury picked up last week.

“There is nothing about this court. They’re great,” he said. “The only thing we can say is the weather we have had for a couple of weeks is humid and cold and windy sometimes.”

Third seed Sharapova returned to court after treatment for her injury to bow out to Larcher de Brito — a big shock in the grand scheme of the tournament — and her conqueror admitted she had personally found the court a little tricky to deal with.

“It was quite slippery,” Larcher de Brito told the BBC. “I tried to take small steps. It was a tough court and surface to play on.”