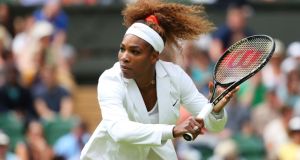 Serena Williams of the United States of America plays a backhand during the warm-up before her 6-1 6-3 first round victory over Mandy Minella of Luxembourg at Wimbledon yesterday. Photograph: Julian Finney/Getty Images

Issues of parity arise at Wimbledon every year. It normally takes something like a 57 -minute match or better to kick-start the debate and more often than not number one seed Serena Williams is the perpetrator. Williams has honed her game to a series of numbers. If she can hit the numbers nobody will beat her.

Yesterday against Luxemburg’s Mandy Minella she hit the numbers for most of the match, had a lull early in the second set and dropped her serve, then began to hit them again. Even for her first outing on Centre Court, tidying it all up in under an hour 6-1, 6-3 is indecently quick, although people forget Steffi Graf could occasionally turn out a double bagel (6-0,6-0) in under 30 minutes.

“I think one of the things about that argument, the reason I think it’s null, is because we have said we’re willing and ready,” countered Williams. “I think every female athlete is ready to play five sets. Actually, the tournaments have said, ‘No, we like you guys playing three sets.’ I don’t think it’s a fair argument at all.”

At last year’s Ricoh British Open golf tournament winner Yani Tseng walked away with a first prize of €272,365 or around €200,000 less than the four women’s semi-finalists at this years Wimbledon. There’s good money in tennis at the top. Williams’ attitude there is that you have to fight for what you get.

The pioneer
“I think women’s tennis has been the pioneer for women’s sports,” she said. “And I believe one of the reasons is because of wonderful pioneers such as Billie Jean King, her sitting down 40 years ago and saying, ‘look, especially to the US Open, we’re not going to accept anything less than equal prize money here – what the men get’.’ Eventually starting their own tour, going from there. It just takes great leaders to have such a wonderful sport . . . .”

So might Laura Robson thank Billie Jean. The 19-year-old left hander came through her first round match to maintain British interest. Robson, ranked 38th in the world defeated the 10th seed, Russian Maria Kirilenko. The Londoner won in straight sets 6-3, 6-4 in 78 minutes. Nobody on Court One thought it lacked entertainment or that Robson does not merit the €44,000 she gets even if she loses her second round match. In that the crowd were at one.