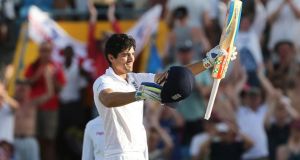 Alistair Cook made his first century since 2013 as the West Indies enjoyed the better of day one of the third test in Barbados. Photograph: Afp

For one England batsman the return journey is complete. For another there is utter desolation when renaissance was all he craved. It was shortly after five o’clock, with the shadows already stretching out across Kensington Oval, when Alastair Cook clipped a half-volley from the fast bowler Shannon Gabriel off his toes and through square-leg for the boundary that after a minute more than six hours’ batting took him to the 26th Test century that had eluded him for the past 704 days of his life and more than 64 hours of batting.

As the ball crossed the rope Cook celebrated, arms aloft, bat held high in one hand, helmet in the other as we had become used to seeing on 25 previous occasions and something many had feared might never be seen again. The crowd had been expectant and now rose to its collective feet to cheer to the rafters an extraordinarily resilient and unfairly maligned cricketer.

Cook was to make 105 and was within one more over of batting through the day when he tried, wearily, to cut an off break from Marlon Samuels, got the faintest of under-edges through to Denesh Ramdin and dragged himself back to the backslapping dressing room. It was to prove the final delivery of the day, and it left West Indies in good spirits for Cook’s hundred had held together an innings that will be resumed on 240 for seven, a creditable effort from the West Indies bowlers on what is easily the best pitch of the series. The only support for Cook came from Moeen Ali, who made 58 comfortable runs before Cook ran him out, and from Joe Root, who batted like a prince for 33 and then was gone. England will need to push beyond 350, the par score for a first innings on this ground, and then bowl well.

The century had been a long time coming – this was Cook’s 36th innings since he made 130 against New Zealand in May 2013 – but the signs have been there for a while. When he reached his half-century it was for the sixth time in his last nine innings, without hitherto having gone further. But his unbeaten 59 in Grenada was the first evidence in all that time that batting had become a synchronised process for him, where the response from his body is an automatic reaction to what his eyes see. He was seeing early and playing smoothly and late so that watching no longer became a tense business. This innings, determined as it necessarily was, still carried with it an air of inevitability.

Sadly – and the word really is appropriate – there was an inevitability also about not just the early demise of Jonathan Trott but the manner of it on a surface that had promised pace and bounce and delivered. It was only nine deliveries into this third and final Test match when the attempt to restore Trott’s distinguished Test match career finally, without a shadow of doubt, hit the rocks. A maiden over from Jerome Taylor to Cook served to show that this pitch had real guts in it. Gabriel is taller and quicker than Taylor, though.

Trott leapt in behind the first two deliveries, playing off the back foot, comfortable enough even if still throwing himself at the ball in a frenetic fashion at odds with his demeanour otherwise. The third, however, was shorter, directed at his ribcage, and rose sharply. No question that it was an awkward delivery, not quite short enough to pull if Trott had that in his repertoire, but not that easy to defend or avoid either. What followed was desperate given the context. Trott had no defence but to turn away and flap at the ball, which took the shoulder of the bat and looped gently towards square-leg, to be caught by Veerasammy Persaul sprinting in from by the umpire. The batsman hauled himself from the crease, utterly disconsolate, and disappeared into the pavilion. He must know. This was not about the dismissal but the manner of it.

In all truth he should never have been placed in such a position. There has been a management attempt to resurrect someone who was so deeply troubled and probably scarred from, ultimately, his experiences against Australia that it was always going to be high risk despite the expert reassurances that would inevitably have been given.

Duncan Fletcher well recalls the similar reassurances he was given regarding Marcus Trescothick. That there was an attempt to convert a No3 batsman to open in a slot that had been problematic was just about understandable: in spite of how people may view it, a No3 has a whole lot in common with an opener, as Gary Ballance has been forced to show this series. It is just that the signs have been there for all to see: nought and four in Antigua; an extremely scratchy 59 and nought in Grenada; and now another nought, the first England opener to record three ducks in a series of no more than three Tests.

England have done commendable things on this trip but the persistence with Trott is not among them. At the very least Adam Lyth, who earned his place through the old-fashioned way of making an unanswerable case with weight of runs, should have been playing in this game, and most probably from the start of the series.

In time, though, when Trott loses some of the hurt that he must inevitably feel, he may come to realise that Gabriel, in administering that dismissal in the manner that he did, has done him a kindness, his guardian archangel. For what may have happened in the future is too horrible to contemplate. There cannot be anyone who does not feel enormous sympathy for Trott now, a tremendous player for England in his prime: he really had nothing to prove, which had to be a large part of his desire to return, and everything to lose. It has been a high-calibre mistake by all parties concerned.