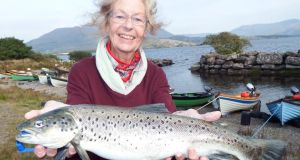 INLAND Fisheries Ireland (IFI) has welcomed a review of more than 300 scientific publications on the effects sea lice can have on sea trout stocks. A team of international scientists from Norway, Scotland and Ireland reviewed all published studies and concluded that sea lice have negatively impacted on stocks in salmon farming areas in Ireland, Scotland and Norway.
Funded by the Norwegian Seafood Research Fund, the study also examined the effect of sea lice on salmon, and concluded that sea lice have a detrimental effect on marine survival of Atlantic salmon with 12-44 per cent fewer spawning in salmon farming areas.
Chairman Brendan O’Mahony, said: “These conclusions concur with previously published IFI research on the potential impact of sea lice from marine salmon farms on salmon survival.”
Indications from studies reviewed show that salmon- farming increases the abundance of lice in marine habitats and that sea lice in intensively farmed areas have negatively impacted wild sea trout populations.
This new study confirms the evidence collected since the early 1990’s in Ireland, particularly in relation to the collapse of Connemara’s sea trout stocks. IFI has consistently called for marine salmon farms to maintain sea lice levels close to zero prior to and during the sea trout and salmon smolt migration period in spring.
The board of IFI believe this new review confirms the need for very tight regulation of sea lice levels on salmon farms and raises legitimate concerns with regard to the potential impact of new, large scale salmon farms, proposed along Ireland’s west coast, on salmon and sea trout stocks.
Billy Smyth, chairman of Galway Bay Against Salmon Cages welcomed the publication and called on Minister Simon Coveney to reject the application from BIM to licence a mega salmon rearing farm on twin sites off Inverin and Inis Oirr.
The chairman said the Minister should instead instigate “an inquiry into the minority position taken by the Marine Institute in regard to the damaging effects of sea lice on wild salmon and sea trout”.
He went to say the Minister should also look into the “the continuing use of public funds into this failing industry at the expense of long-term jobs and opportunities of other marine activities; and, the refusal of BIM to consider on-shore recirculating systems for salmon rearing, now rapidly becoming a reality in more forward-thinking countries.”
Arctic char
Underwater monitoring by Natural Resources Wales has checked on the amount of Arctic char heading upstream to spawn from Llyn Padarn in Snowdonia, north Wales. The fish were monitored using sonar over a six-week period when char traditionally migrate up the Afon y Bala to spawn.
Four underwater cameras, installed for two weeks recorded 560 fish passing through. These included 48 Arctic char, 42 salmon, 105 brown trout and eight sea trout.
In the last four years, 8,000 young char were released into Llyn Padarn to boost the population with a further 1,700 later this year. More than 7,000 char were released into Llyn Crafnant in the Conwy Valley to establish a back-up population.
Tim Jones of NRW said: “The result of our monitoring is encouraging but the amount of char migrating is still well below the numbers a lake of this size can support.”
Fresh fish influx
Lough Currane has fished well recently with a good number of sea trout caught on the fly. The mix is also good, with fish ranging up to 5lbs. Good numbers ran up to the upper lakes on the last fresh and Namona and Cloonaghlin fished particularly well.
The influx of fresh fish into Currane seems to have stirred up the resident salmon and they have been coming to small flies. “Although quite stale these fish are tough and put up a tremendous battle on light gear!” Rod Robinson said.
Wicklow winter league
Annamoe Trout Fisheries in Co Wicklow has announced details of its winter league sponsored by Southside Angling Centre. The league will comprise of four qualifiers with the top five anglers from each heat going forward to the grand final.
Entry fee is ¤22. First heat is scheduled for October 18th, fishing 10am-2pm. Please send entries to Brian Nally on 086-2598563.
angling@irishtimes.com