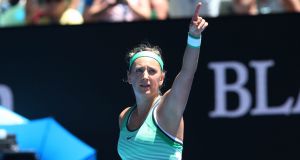 Victoria Azarenka is through to the fourth round of the Australian Open. Photograph: EPA

Victoria Azarenka believes overcoming depression and poverty has taken away the pressure to win a grand slam.

Azarenka secured her place in the Australian Open fourth round on Saturday with a blistering 6-1 6-1 win over talented youngster Naomi Osaka.

The Belarusian has dropped only five games in her opening three matches and the 2012 and 2013 champion is emerging as the greatest threat to Serena Williams defending her title.

It has not always been so easy for the 26-year-old, however.

She struggled with depression during 2014 when a combination of injuries and personal problems took their toll, while a tough upbringing in Minsk left her sometimes struggling for her next meal in her earlier days.

“So that was pressure, you know, to survive. That was survival, really.

“So pressure right now is go out there and face a big opponent?

“OK, but when you’re like hungry and you’ve got to go play and you have absolutely nothing, that’s big pressure.”

Azarenka is happier now, with a close group of friends and family helping her to overcome her depression and impose a greater sense of routine.

The world number 16 stops short of saying her problems have benefited her tennis but she does believe they have increased her resilience.

“I wouldn’t call it an advantage,” Azarenka said.

“I think that’s just what makes you tough. I wouldn’t call it as an advantage, because it never feels like it, for sure.”

Azarenka will now play Czech Barbora Strycova for a place in the quarter-finals, while also in the bottom half of the draw is Chinese qualifier Shuai Zhang, who extended her fairytale run in Melbourne.

Zhang had lost in 14 consecutive grand slam first rounds coming into the tournament but now finds herself on the brink of the last eight after following up wins over Simona Halep and Alize Cornet with a 6-1 6-3 victory against American Varvara Lepchenko.

“Do I believe I can win the tournament? Before, no. But today maybe yes,” said Zhang, who now plays American Madison Keys.

Keys came from a set down to beat Ana Ivanovic 4-6 6-4 6-4 in a match that was delayed 50 minutes halfway through.

Play was suspended as Ivanovic led 6-4 1-0 after the Serb’s coach Nigel Sears, who is also Andy Murray’s father-in-law, collapsed and had to be taken to hospital. Sears was undergoing tests but is understood to be conscious, talking and sitting up.

Third seed Garbine Muguruza was dumped out by Strycova while Britain’s Johanna Konta is through to face Russian Ekaterina Makarova.