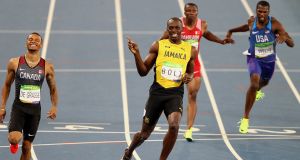 Usain Bolt jogged and joked his way to his fastest time this year to cruise into the 200 metres final in Rio and move a step closer to an Olympic ‘triple triple’.

The Jamaican, who has already won his third straight 100m gold and is out to do the same in the 200m and 4x100m relay, proved he could be set to threaten his world record of 19.19 seconds in Thursday’s final as he coasted home in 19.78secs.

The 29-year-old got out well and was well ahead on the home straight before easing off and even sharing a chuckle with Andre De Grasse as the pair crossed the line.

De Grasse, the 100m bronze medallist, ran a Canadian record 19.80s, with Adam Gemili finishing in 20.08 to qualify in third as a fastest qualifier.

“Andre was supposed to slow down,” Bolt told the BBC. “He didn’t. I said, ‘What are you doing, it is the semis?’. He said he had to push me.

It is the manner of Bolt’s run that will put most fear into his rivals, though. He had so much more in the tank.

He has consistently stated that he is going after his 200m world record here. He was not kidding.

Justin Gatlin’s medal hopes are over, though, as the two-time drug cheat crashed out, finishing third in his semi-final in 20.13, his time not good enough to go through as a fastest loser.

Meanwhile Jamaica’s Elaine Thompson stormed to victory in the women’s Olympic 200 metres final with a time of 21.78 seconds on Wednesday to complete the Games sprint double.

Dafne Schippers of the Netherlands struggled to keep up with Thompson’s blazing run and had to settle for silver with American Torie Bowie grabbing the bronze.