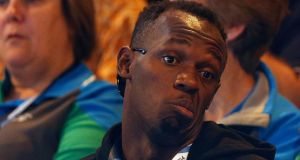 The row between Usain Bolt and The Times over whether he called the Commonwealth Games “a bit shit” continues to rumble on – with Bolt calling the story “nonsense” and the paper insisting they stand by it “100 per cent”.

Bolt ventured out of the Athletes’ Village to watch Jamaica’s netball team, the Reggae Girls, lose 50-42 to New Zealand afternoon. And while he appeared relaxed, posing for photographs with volunteers, taking part in a Mexican wave, and waving a Jamaican flag, his entourage quickly called for security when he was approached for comment by journalists.

One reporter, the Daily Mail’s Jonathan McEvoy, had his accreditation ripped off him in a row with Bolt’s security guard and was led away by officials – although he was eventually allowed to return. His crime, he claimed, was to say to Bolt’s agent Ricky Simms “he hasn’t actually denied the comments, has he?”

According to Times reporter Katie Gibbons, she approached Bolt on Tuesday as he waited in the rain for his car at the athletes’ village. After showing Bolt her media accreditation he reportedly told her that he thought that “the Olympics were better” and that he was “not really” having fun in Glasgow and felt the Games were “a bit shit” before he left “to do some business”.

As Bolt passed Gibbons at the netball mixed zone on Wednesday, Gibbons shouted: “Why did you deny what you said to me yesterday?” Bolt didn’t appear to hear. His response was simply: “Awesome.”

However, earlier the Jamaican sprinter was a little more forthcoming on Twitter, saying: “I’m waking up to this nonsense.. journalist please don’t create lies to make headlines”.

I'm waking up to this nonsense..journalist please don't create lies to make headlines

Bolt’s manager, Ricky Simms, also claimed the reports were “utter rubbish”, adding: “The atmosphere in and around the stadiums has been absolutely fantastic and I have absolutely no idea where these quotes have come from.”

But The Times’ Scottish editor Angus Macleod insisted he had full confidence in Gibbons. “We stand by this story 100 per cent,” he said. “We have utter confidence in this story.”

It is understood that The Times are considering whether to publish a full transcript of the short interview in Thursday’s paper.

Jamaica’s netball players were reluctant to talk about whether Bolt’s appearance had distracted them during their 50-42 defeat. “Can you ask me a question about the game,” replied Romelda Aiken, while the team’s goal defence, Stacian Facey, insisted: “I didn’t even know he was here.”

Meanwhile, Games officials have denied the ongoing row is distracting from the Games. Mike Hooper, the chief executive of the Commonwealth Games Federation, said: “We take Mr Bolt at his word. His tweet says it all. These are a fantastic Games.

“As you saw in his press conference last Saturday he is very upbeat. He is really positive about running the relay and I don’t wish to comment on the journalist and work of The Times.”

Bolt, who is only competing in the 4x100m relay after struggling with a foot injury, insisted he was eager to make his Commonwealth Games debut in Glasgow having missed Melbourne through injury in 2006 and not appearing in Delhi in 2010 because they came too late in the season for him.

Meanwhile, another Jamaican sprinter, Jason Livermore, also expressed his disquiet about the Games. Asked what he was making of the life in the athletes’ village and his wellbeing he told the BBC: “Well it can be better - things can be a little bit better for us. Can be better in a lot of sense. We have to just enjoy and give god thanks.

“I hope Usain’s having a better time than me!” he joked. “The people in Scotland are very welcoming so I can’t complain. There’s a nice atmosphere and a nice crowd. But it’s very cold. Back in Jamaica it’s not like this. I need to get me some clothes. It’s freezing.”

On Monday night the Jamaican 100m sprinter Kemar Bailey-Cole negatively compared his Glasgow experience with that of London 2012. “I can’t compare them,” he said. “London was really different food. It was way better than this. Scottish food could do with some more seasoning.”