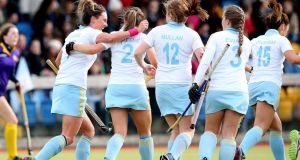 Nonetheless, it proved the best Irish finish in the top club competition on the continent since Randalstown in 1995 and puts them in good shape for next weekend’s Irish Hockey League finals.

Jonathan Harte’s side trailed 1-0 at the break and 2-0 early in the second half but a sharp volley from Katie Mullan reduced the arrears with 17 minutes to go.

Nikki Evans was proving a handful in the forward line while, defensively, Leah Ewart and Mullan were in strong form. But the loss of Anna O’Flanagan to injury was keenly felt and the students ran out of steam in the closing phases with Julie King and Jo Hunter punishing them late on to swing the game out of their hands.

Meanwhile, the men’s Irish Hockey League took a big step closer to being realised late on Sunday evening with the news that Ulster clubs Lisnagarvey, Banbridge, Annadale and Cookstown have all accepted places to the expanded version of the competition.

A recent Ulster Hockey special general meeting had voted for the province not to support the new season-long league, the governing body encouraging clubs not to take part.

Despite this, all four clubs have accepted the IHA’s invitation in “good faith”, a move which will see the clubs move out of the provincial leagues and into the ten-team national league. Bann, Garvey and Annadale have stated their intentions to definitely take part while Cookstown - the most publicly reticent club about the new format - are likely to have a club SGM to decided whether they follow through or withdraw and stay in the Ulster Premier League.

Instonians, another club publicly against the IHL format, will contest the wildcard playoffs against Railway Union and UCC next weekend for the final IHL berth. Monkstown, Glenanne, Pembroke, Three Rock Rovers and Cork C of I are the other clubs to have accepted invitations to the new league.

The women’s invitations will be released next week on the completion of all the provincial leagues.