Tyson Fury needs to fight the enemies gnawing at his spirit

In the light of this week’s ‘retirement’, even Fury himself cannot be sure he will box again 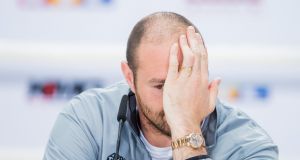 Tyson Fury is not laughing so much any more, it seems. When Peter Fury announced last week that his nephew was having “medical” issues, we knew they were not physical.

To believe Tyson Fury’s assertion this week that he has retired from boxing - only for him to recant within three hours - is to enter the fighter’s disturbed world of mocking disregard for public opinion. In this constantly changing landscape, every critic is a conspirator, every sycophant a friend and every lie is a truth.

Not even Fury can be sure if he will box again, whatever he says. The unbeaten but confused heavyweight champion of the world might well issue another statement at any time - through his promoter or close associates in the guarded language of the business, or, more likely, in a coarse rant on Twitter - declaring he will indeed walk away from the several millions available to him for doing the one thing he is good at.

Fury is having a laugh, a sad and lonely one. One minute he cares, the next he doesn’t. He makes the money men nervous because he is a one-off; he is gold dust to them but also their worst nightmare because they cannot tame him. He is not their willing servant.

But there is more at stake than the four gaudy belts he ripped away from Wladimir Klitschko in Germany last November, which seem destined to be auctioned off to the highest bidder, as he vacillates about defending them, and the governing bodies prepare judgment on him for a string of misdemeanours. What matters more is Fury’s mental health.

Five years ago, Fury told my Guardian colleague, Donald McRae: “There is a name for what I have, where, one minute I’m happy, and the next minute I’m sad, like commit-suicide-sad. And for no reason - nothing’s changed ... One minute I’m over the moon and the next minute I feel like getting in my car and running it into a wall at a hundred miles an hour. I don’t know what’s wrong with me. I’m messed up.”

In that single utterance, and a few since, Fury sounded as vulnerable as were (and are) three other heavyweights of recent times: Frank Bruno, Mike Tyson and Oliver McCall.

When I sat down with Bruno over several months to explore the bipolar curse that had consumed him - for an autobiography called Fighting Back - I was admitted to the outer edges of a dark place. Listening to Frank describe the medicated hell of his 28-day enforced incarceration in 2003 was a chilling experience. As a mere collaborator on a book, I could walk away; Bruno has to live with his illness and has endured further short terms of protective treatment, the most recent of them in September 2015.

Frank was always a reluctant warrior. His size and strength made him what he was, but his nature pulled him in the opposite direction. For the lack of a viable alternative, he conquered his reservations and for the six months straddling 1995, between beating McCall over 12 rounds at Wembley and losing to Tyson in three rounds of hell in Las Vegas, Bruno was officially the best heavyweight in the world.

Boxing didn’t cause his illness; nor did it help. It is telling that Bruno's final two opponents also suffered damaging mental anguish. Each of them also went to prison. Both have somehow survived - and, paradoxically, the trade they plied supplied them with the resolve to do so. But, as Bruno said in a quiet moment, nobody sane hits people in the head for a living. He wasn’t joking.

Unlike Bruno, Fury comes from a long line of fighters - inside the ring and out. His Travellers’ roots go deep. His courage and braggadocio in the ring are the fruits of his upbringing, his irreverence for the opinion of others the understandable consequence of prejudice shown towards his people.

He was born into the sport most suited to his personality, given a first name by his father, “Gypsy John”, that echoed admiration for Iron Mike Tyson, and guided by his uncle Peter to the summit of boxing’s most glamorous and lucrative division. But professional boxing and credibility hang together by a slender thread.

Today’s Twitter excess or press-conference statement is too often tomorrow’s laugh-filled denial or retraction. If Fury was looking to make a statement about the integrity and worth of the Travellers’ community, he had landed in a business where those qualities are often fleeting.

It doesn’t much matter in the wider scheme of things if Fury fights again, because the heavyweight championship, once the biggest prize in sport, has dwindled in stature. The title once owned by Jack Dempsey, Joe Louis, Rocky Marciano and Muhammad Ali (although not always gleamingly untarnished) has been reduced over the years to a cardboard crown by the abuse of weak administrators and the compliance of other interested parties.

Tyson, at least, ruled with exhilarating menace, but Lennox Lewis and the Klitschko brothers, for all their excellence, did not fully recapture the magic. Now, there is no stand-out world champion, just an imposing list of aspirants with different belts. Fury stood out, not for his boxing, which is high-calibre and much improved, but his eccentric behaviour and statements.

Now, the biggest challenge for him is not duking it out for another swag against Klitschko, Anthony Joshua or Deontay Wilder; it is battling with much stronger enemies gnawing at his spirit every day.

Fury appears to have no respect for the adulation of others although, no doubt, the novelty that comes with acclaim might briefly have entertained him in his lighter moments. Who else would have dressed up as Batman for a Klitschko press conference?

But he is not laughing so much any more, it seems. When Peter Fury announced last week that his nephew was having “medical” issues, we knew they were not physical. Everyone was instantly aware that Fury was struggling not with a turned ankle or his weight, but his buzzing mind. He needed help, and a decent amount of time away from boxing.

That has not changed. What Fury says today bears no relevance to what he might say tomorrow or the day after. It is white noise, a cry for help and understanding, perhaps. His uncle said Fury, who feigns indifference, felt he had been given no proper respect for bringing Klitschko’s decade of dominance to an end. That wound is a long way from healed.