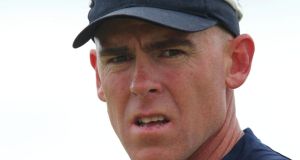 Trent Johnson: is confident as the Irish women prepare to face New Zealand.

Johnston captained Ireland under the coaching of Adi Birrell seven years ago in the Caribbean and hasn’t been afraid to use some of the same approaches as he makes his coaching debut at a major tournament.

“Being a part of that in 2007 it is exactly like what we are witnessing here with the girls and I’ve tried to base our preparations around what Adi did with us back then,” said Johnston after putting the squad through their final training session with his fellow coach Mark Lane.

’Pretty good’
“You know that formula was pretty good. The girls are of a similar ability to what the guys were back then and you know they’re very good and listen to everything, their commitment is great.

“You can ask nothing more as a coach so we’re looking forward to finally getting stuck into it tomorrow.”

With Australia, South Africa and Pakistan also in Group A, Ireland will have their work cut out over the next seven days, although a victory over Pakistan in Doha back in January was a huge confidence boost to the squad.

Opening encounter
New Zealand went down to a seven-run defeat to two-time reigning champions Australia in their opening encounter and Johnston didn’t see anything too daunting in today’s opponents.

“They were pretty basic, they sort of bowled it pretty straight on top of off-stump and it was quite difficult to score. We spoke about that this morning in practice.

“We’ll go back to the hotel and rest up, have a bit of a chat this evening and get stuck into it tomorrow.”