The sporting decade that was: explosion of joy a sight to behold 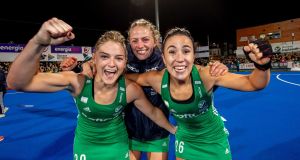 Being tasked with choosing your favourite sporting moment of the decade is akin to being told you have to pick your favourite child. Merciless. And when you go for the 2008 Federer v Nadal Wimbledon final and you’re asked ‘which part of ‘DECADE’ do you not understand?’, you have to go through the whole tortuous selection process all over again.

It is, though, decidedly pleasant scouring the archives to remind yourself of stupendous moments that might well have escaped your memory, and some that never will. Like Katie winning gold in London. Or at least two dozen Messi moments. Or when Tiger won the 2019 Masters. Or when the Irish women’s rugby team beat Italy to win the Grand Slam, knowing the journey all those players had been through to reach those heights. Or the thrilling madness of the conclusions to last summer’s cricket World Cup final and third Ashes test, Ben Stokes doing his Herculean thing.

Or when Cork’s Gemma O’Connor, playing in the 2017 camogie All Ireland final despite having banjaxed ligaments in her knee and ankle just three weeks before, scored a point from the halfway line to level the game at the death against Kilkenny, her team-mate Julia White getting the winner soon after.

It’s the courage and the composure in those moments, not to mention the skill, that leaves you in awe. So, on that note, we have a winner: Ireland’s November 2019 shoot-out victory over Canada that made this the first Irish women’s hockey team to qualify for the Olympics.

If their improbable success at the World Cup in the summer of 2018 was exceptional, Olympic qualification had always been the holy grail. But after two 0-0s in Donnybrook, in front of over 6,000 spectators on each night, both games as enjoyable as a root canal, they found themselves 3-1 down to Canada in the shoot-out, on the brink of missing out yet again.

Twice Ayeisha McFerran had to make saves to keep Ireland in it, and twice she did. Twice Irish players had to score or it would have been all over - Bethany Barr and Chloe Watkins obliged.

And when it went to sudden death, Roisin Upton had the guts to step up again, having failed to score in the regular shoot-out, and not even a broken bone in her arm could stop her from scoring from a nigh on impossible angle.

And then McFerran did enough to prevent Amanda Woodcroft from levelling it up, pause pressed on the explosion of joy until the video referee checked for a foul. The 90 second wait felt interminable. But finally: “There is no clear reason to change the decision.” Ireland were Tokyo bound. The players’ euphoria was a sight to behold.