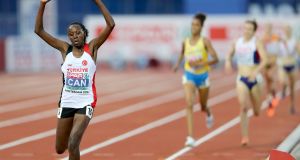 Yasemin Can wins the European 10,000m in Amsterdam last July just over four months after completing her transfer from Kenya to Turkey. Photograph: Getty

Like most seminal sporting moments in our lives, I can remember exactly where I was when Catherina McKiernan won the inaugural European Cross Country: sitting in the back of my mother’s old Renault 4 in a muddy field somewhere around Tinryland, on the outskirts of Carlow town.

A gang of us from Dundrum in south Dublin had driven down to run the Leinster Cross Country. It was December 1994, and just home from a running scholarship in America, this was my race to lose. Which I did, badly, letting some local runner get away on the last lap, and ending up fourth, disgusted with myself.

Not long after, we sat in the back of the car untying our spikes when Greg Allen came on RTÉ radio, live from Alnwick, in the north of England. McKiernan had just won the gold medal, jousting with Spain’s Julia Vaquero down the homestretch, her victory margin a mere second. It may as well have been a mile: having finishing second in the previous two editions of the World Cross Country, there was simply no denying McKiernan this title.

It was an inspired and inspiring run on many levels, giving hope for all of us running around Tinryland, even if those hopes never did come true. The European Cross Country, as McKiernan had just proved, was winnable, certainly worth aspiring towards, and that’s an essential component of any athlete’s progression.

By then, the World Cross Country had been reduced to a parade of African runners. Through no fault of their own, naturally. There were the occasional exceptions, including Sonia O’Sullivan’s brilliant win in Marrakech in 1998, but otherwise the East African dominance remains near complete, Ethiopia or Kenya winning every senior men’s team race since 1981. Since 2011 the World Cross Country has gone biennial yet continues to be a shadow of its former self.

Which is essentially why, in 1994, the European Cross Country first came to life, giving runners born on this continent their fair shot at glory. And for many years it did exactly that – Portugal’s Paulo Guerra and Ukraine’s Serhiy Lebid among the early conquerors of the men’s title, and likewise Britain’s Paula Radcliffe and Hayley Yelling of the women’s title.

Five years ago, Fionnuala Britton – now going by her married name, McCormack – bridged the 17-year gap since McKiernan’s inaugural win, then defended that title in Budapest in 2012, also leading the Irish women’s team to gold medals. To say we may not see those days again anytime soon is no exaggeration.

Because 2012 also happens to be the year the IAAF, the governing body of world athletics, amended rule five, which governs eligibility and transfer of allegiance.

Previously, athletes acquiring new citizenship needed to wait three years before representing that country, or at least one year, provided agreement was reached between the two countries; under the amended rule, that period can now be further “reduced” or even “cancelled in exceptional cases” by the IAAF Council – and thus, it seems, opening the proverbial floodgates.

This decision also happened to coincide with the 2012 World Indoors in Istanbul, where Ilham Ozbilen, formerly William Biwott Tanui of Kenya, had his transfer of allegiance fast-tracked so that he could compete in time for host’s Turkey (which he did, winning silver over 1,500m). More recently, in the months before the Rio Olympics, the IAAF approved 85 transfers of allegiance, 12 of those suddenly finding a new home in Bahrain. Among them was Ruth Jebet, the Kenyan-born athlete who comfortably won gold in the 3,000m steeplechase, and also Andrew Fisher, the Jamaica-born sprinter who admitted he’d only once visited Bahrain.

Every sport has different rules on this issue, and for good reason. World Rugby are considering an extension of their three-year residency rule, possibly to five years, which under regulation eight, has allowed Joe Schmidt to strengthen his squad in recent seasons by including the likes Richardt Strauss, Jared Payne and CJ Stander.

In the meantime, the last three men’s European Cross County titles have gone to African-born athletes – Alemayehu Bezabeh from Ethiopia, who won for Spain in 2013, and Kenya’s Polat Kemboi Arikan and Ali Kaya, who won for Turkey in 2014 and 2015. Last year’s women’s title went to Sifan Hassan from Ethiopia, now running for the Netherlands.

Indeed if McCormack is to win back the women’s title in Chia, Italy on Sunday, she’ll also need to beat not one but two Kenyan runners now representing Turkey, Yasemin Can and Meryem Akda, neither of whom have lived or trained there for any significant period of time.

It’s a tall order: Can, formerly Vivian Jemutai, has already caused a stir by winning the European 10,000m title in Amsterdam last July, just over four months after completing her transfer. McCormack, who finished fourth in the same race, didn’t hide her feelings, infamously declaring “it’s a joke, really, the exact same every f**king time.”

Likewise now with Akda, the Kenyan previously known as Miriam Jepchirchir, who also only became eligible to represent Turkey in March of this year, having competed for Kenya up until May of 2015.

These things don’t have to be a joke. No one questioned Mo Farah’s win in the European Cross Country in 2006, despite the fact he was born in Somalia, given he’d moved to Britain at age eight. European athletics are ultimately governed by the IAAF on this issue, and while IAAF president Seb Coe has suggested some rule changes, these can’t happen soon enough.

Because for now, the European Cross Country is no longer the inspired and inspiring race it once was, but instead a shadow of its former self, and a shadowy one at that.