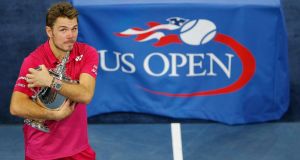 After treading a gilded path to his seventh US Open final, Novak Djokovic stumbled, literally, in sight of the prize as Stan Wawrinka found the strength and conviction to beat the world No1 in four pulsating sets – the last of them wreathed in controversy – on a warm September night.

Patrick McEnroe, commentating in the ESPN box, shared the cynical displeasure of most onlookers when the defending champion, who appeared to be cramping, was granted a dubious medical timeout to have his toes tended to midway through the fourth set, shortly after being broken.

It appeared to be a risible manipulation of the regulations, which say timeouts can only be taken for an “acute medical condition that requires immediate attention”. Wawrinka did not seem impressed, seeking assurance from the tournament referee, Brian Earley, that all was above board – and shooting his opponent a knowing glance.

“Sorry, man,” Djokovic said to Wawrinka. For what, one wondered? They had been playing for three hours and 23 minutes, by a distance Djokovic’s longest match of the tournament.

“That was another example of a complete abuse of the rules,” said McEnroe. “It’s up to the officials to do something about it, and they just don’t have the guts to do it.”

Otherwise, the final was a minor classic. Wawrinka won his third major 6-7, 6-4, 7-5, 6-3 in just under four hours, with several passages of glorious tennis from both players.

“I don’t know what’s happening right now. Novak, you’re a great champion,” Wawrinka said after the match. “We know each other since many, many years. I had the chance to practise with him and play him in big matches. This is amazing. I came here not expecting to win it, but I was trying to win every match. I am completely empty. I had to bring everything today.”

Djokovic paid tribute to his opponent after the match. “I cannot tell you that [about their exchange at the net]. It was a friendly chat. Congratulations Stan. You were the more courageous player in the decisive moment and you deserved to win this title. He was the better player, tougher mentally. It was a fantastic couple of weeks for me. I didn’t know if I should come a few weeks before because I suffered physically.”

In the last 50 men’s slams, only the Argentinian Juan Martín del Potro here in the 2009 final, has broken the hegemony of the old world, as George Bush Jr used to call it – and, in another all-European final, Switzerland prevailed over Serbia. It was Wawrinka’s first US Open, to go with titles in Melbourne and Paris, and his fifth victory in 23 matches against the world No1. Under the circumstances, it might have been the most satisfying.

When Wawrinka beat Djokovic to win the French Open last year, he trusted his strong right arm, the one tattooed with Beckett’s famous “fail better” quote. It did not click immediately there or here – but nor did it fail him when it mattered. After dropping the first set, he not only avoided embarrassment, he crushed the Serb to win. It was an extraordinary fightback.

The heatwave finally broke, the lightest of zephyrs soothing the finalists’ brows in ideal conditions, with the roof open and the court playing a little more quickly than in the humid conditions that had prevailed for much of the tournament.

As at Roland Garros, Wawrinka started nervously, spraying shots everywhere, and Djokovic hit an ominous rhythm to go 3-0 up in under 10 minutes. But Wawrinka kept faith in his ground strokes, almost disregarding the circumstances. Where Gaël Monfils had tried to rope-a-dope Djokovic in the semi-finals, Wawrinka was still going for the knockout.

The champion inexplicably dropped his guard. A 134mph serve earned Wawrinka a tie-break after he had played much of the set on his heels, but Djokovic played some sublime shots to take the set in his ninth shootout win over Wawrinka in 10 such contests, this time giving up just a single point.

He moved to the second set comfortable in the knowledge that he was 51-0 at this tournament after winning the first set. Yet there was something in the still, early evening air to suggest drama.

As he did in Paris, Wawrinka drew that single-handed backhand from its scabbard and painted the deuce corner on his way to saving three break points for 3-1 up just under the hour. Djokovic prowled the baseline, breathing hard and looking as if he was enduring some sort of private hell. Perhaps he was. Tennis at this level is no picnic.

The Swiss, whose serve has been such a weapon here, hit his fourth double fault, and was hanging on at 4-1.

Djokovic broke back but gestured angrily towards Boris Becker and his team as Wawrinka held to love for 5-4. A blistering forehand down the line earned Wawrinka two set points in the 10th game. Djokovic saved one of them to win a tense rally with a deft volley, but he shoved a forehand wide and they were a set apiece.

The world No1 smashed his racket to smithereens during the break. Who could blame him?

Wawrinka saved three break points to hold at the start of the third after nearly two hours of tennis.

At about this point in his semi-final against Monfils, Djokovic was almost out on his feet in the oppressive heat and humidity. Still, he had played only eight hours and 58 minutes getting to the final, through 13 completed sets, because three of his six matches were incomplete due to a walkover and two retirements; Wawrinka endured nearly twice that: 17 hours and 54 minutes through 23 sets.

Yet there was little between them in stamina and strength as each sought to win another two sets, preferably in a row. When the world No3 broke in the second game of the third set, the odds swung sharply in his favour. Djokovic knew he was in trouble. Bundled out early at Wimbledon when ambitions of a calendar slam were still alive, and hobbled since with injuries to wrist, elbow and both shoulders, the proudest of champions would not lie down, though. He broke back and after two-and-a-half hours, they were level again, a set each and 3-3.

A quarter of an hour later, Djokovic held to love for the sixth time, to stay in the set, but his level dropped at 6-5 and a loose backhand gave Wawrinka set point. Djokovic sliced a backhand wide – and the noise level in the arena went rock-concert crazy.

All tournament, Djokovic has had to receive treatment for some complaint or other. At 30-30 on his serve in the second game of the fourth set, he doubled up in pain after belting a forehand from deep, clutching at his groin. Two points later, Wawrinka broke him for 2-0.

Wawrinka broke to love, but Djokovic did not immediately seek medical assistance before the fourth game, perhaps suspecting it was cramp that had cut him down – and that is not treatable, as it is considered a failure in condition. He was desperate and somehow fought through three deuce points to hold.

Then the trainer emerged, Djokovic took off his shoes and asked for a callous to be clipped from under the big toe of his left foot, as well as a quick manicure of the toes on his right foot.

Refreshed, Djokovic returned to the court, and was not moving like someone with tender feet. He grabbed his 16th and 17th break points – but could not reap a dividend. And there weren’t too many people in the arena who had much sympathy with him. At the 2-5 changeover, the trainer re-emerged to treat Djokovic’s feet again.

He held, somehow, again moving with freedom, and went up two points as Wawrinka served for the title and his girlfriend, Donna Vekic, could barely watch as he struggled to deuce. The Swiss won an epic rally to get to match point with a gentle dab, Djokovic sprawled on hands and knees at the back of the court – and Wawrinka raised his arms in triumph as his opponent’s final shot drifted long.

Djokovic was defensive later in explaining the timeouts. “Just the toenails were off and bleeding. Yeah, it was quite painful to move around. You know, I tried.” He added: “The toe just happened today. Some other injury that was, you know, very serious at the time. I really didn’t know whether or not I’m going to come, to be honest. Decided like eight, nine days before the start of the Open, just to try. To play finals, it’s quite amazing.”

Asked if he were cramping in the final set, he replied. “No.”

Asked if the rules should be looked at, given the suspicion that some players are abusing them, he said, “We’ll talk about it, sure. If players bring that up to the table, you know. You know, I didn’t have any I guess major complaints about that against me or me against any other player. If there are ... if this is a debate and players think there should be something changed in the rules, of course we are there to discuss. Will bring this up to the council soon I guess if this is a big deal.”

What a fortnight it has been. It began with Phil Collins, of Chiswick and Miami, singing In the Air Tonight (rather well), an apt choice to mark the opening of the new roof, and culminated before play on Sunday with Norm Lewis’s rich baritone embracing the national anthem, after a moment of silence to mark the 15th anniversary of 9/11, as members of the US Marine 6th Communications Battalion, Brooklyn, drew the Stars and Stripes across the court.

They do have a sense of occasion in this noisy old town, and they were rewarded with a final that had pretty much everything.